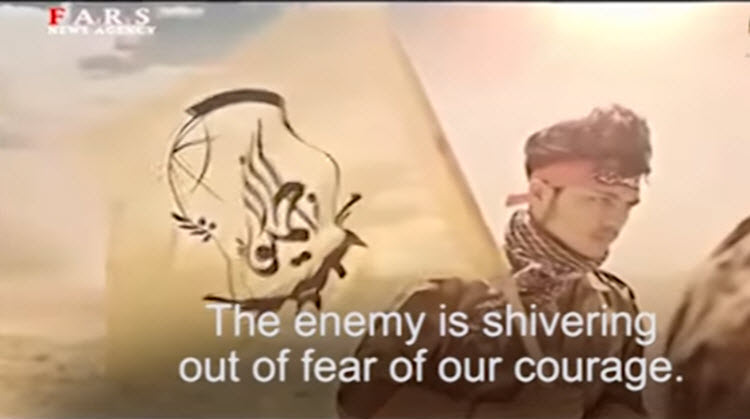 The six-minute clip was produced and broadcast by the state television channel Ofogh TV (www.ofoghtv.ir). Other state broadcasters such as the IRGC-affiliated FARS news agency have carried the video.

The video itself is dedicated to the “unsung heroes of the earth, the renowned of the skies, and the combatants of the Fatemiyoun Divison,” and includes scenes of a man from Afghanistan looking over photos of Afghans who have died in the Syrian conflict. He is encouraged by a young boy and girl to join the war.

He then changes into an army uniform in front of a picture of the Iranian government’s Supreme Leader Ali Khamenei and wears the Fatemiyoun militia emblem on his arm. Throughout the clip, another man sings a propagandistic song with Afghan lyrics.

The lyrics say in part: “To the raging enemy we are the sharp sword. We are from the Islamic nation and the country of Afghanistan. We are the mentors of conviction and we are the adherents of the Quran. We are the heirs to the blood, the heirs to the martyrs. We will fill the world with the resonance of our fight, of our steadfastness and firmness, and of our will and determination.”

A headband is seen being placed upon the forehead of a teenage recruit, reading “Defender of the Holy Shrine.” Iran’s regime describes its involvement in the Syrian war as an attempt to “defend the sacred shrines.” However most of the Iranian regime’s casualties are in the Aleppo region, almost 300 kilometres away from the holy Shiite shrines near Damascus.

According to intelligence recently obtained by the network of the opposition group People’s Mojahedin Organization of Iran (PMOI or MEK), Tehran has deployed more than 70,000 of its Revolutionary Guards, Regular Army units and foreign militias to fight for Assad in Syria. Among them are between 15,000 and 20,000 members of the Fatemiyoun, an Afghan militia recruited by the IRGC Quds Force.

Commenting on the new propaganda clip in the Iranian regime’s state media recruiting Afghans for the Syrian civil war, Shahin Gobadi of the Foreign Affairs Committee of the National Council of Resistance of Iran on Tuesday said:

“Syria has turned into a total quagmire and strategic impasse for the Iranian regime. Ali Khamenei, the regime’s supreme leader, views an end to Assad’s rule as a red line for the survival of the clerical regime. While the Iranian youths refrain from taking part in this criminal war, Khamenei  is left with no choice but to dispatch his veteran IRGC forces and commanders to Syria, even though up to 50 IRGC Brigadier Generals have been killed in Syria so far. He is also trying to deploy more troops to the war front, and dispatch more of his non-Iranian mercenaries, in particular Afghan refugees as cannon fodder.”

“Despite all of his crimes and mobilization of all of the military, financial, and propaganda capabilities of the regime, there has been no breakthrough. Instead the Iranian regime’s casualties are steadily rising and this has led to scorn for the regime and its isolation even among Afghan refugees in Iran to a point where Khamenei personally met with the families of the regime’s Afghan mercenaries who were killed in Syria to boost their morale on March 28.”

Following a series of major defeats and high casualties in recent months, Iran’s fundamentalist regime has found it increasingly difficult to recruit Iranian units to the conflict. Instead embarking on a major drive to mobilise Afghan refugees living in Iran, various tactics including threats of execution and the promise of a paid job.

The National Council of Resistance of Iran (NCRI) said on April 8: “Quds Force offices in Tehran, as well as its offices in Iran’s eastern regions, employ enticement or coercion to compel Afghans residing in Iran to register to go to Syria. The IRGC abuses the extreme poverty of Afghan nationals and their need to attain legal documents to have them go to Syria. In many cases Afghan prisoners or those with death sentences are pardoned if they volunteer to fight in Syria.”

In April, a top IRGC general acknowledged that the Iranian regime is burying its Afghan mercenaries who have died fighting to keep Assad in power as incognitos in Iran’s cemeteries. The unceremonious burials are thought to be taking place in order to cover up the high number of casualties that the IRGC’s Afghan recruits have suffered.

Gen. Saeed Qassemi, a senior IRGC commander, was quoted on April 9 by the state-run Shaeed News website as saying that in one case in March, some 28 Afghan mercenaries of the IRGC Quds Force who were killed in Syria were buried in Tehran as incognitos.

According to official statistics published by the regime, there are at least 1.49 million Afghan refugees in Iran. Of these, between 800,000 and 1 million are without documents, identification and are unemployed. According to the regulations of the Interior Ministry, the Afghans residing in Iran cannot own property and they have no personal or legal identity. They live not only under the poverty line, but under the “survival” line.

In such circumstances, the regime established the Fatemiyoun militia under IRGC Quds Force supervision to recruit and dispatch Afghans to Syria. The Afghan force started as a battalion, then grew into a brigade, and later became a division.

According to a February 5 report by the NCRI, quoting information provided by the PMOI, the IRGC’s Afghan recruits are taken to Quds Force training garrisons to receive two to four weeks of basic military training. Once they complete their training, they receive around $500 and are subsequently dispatched to Syria in groups of 200. These are later organised into the Fatemiyoun Divisions.

Recruits are flown to Damascus Airport by Mahan Airline that belongs to the IRGC. Once in Syria, they are first taken to visit the shrines of Zeinab and Roqiya and they are then sent to different fronts. Their missions last for 60 days and all of their commanders and trainers are from the IRGC.

The high number of casualties among Afghan forces and the Iranian regime’s lack of support to the families of those killed or injured in Syria has raised much discontent among Afghans that are sent to Syria and their families. Therefore many Afghans living in Iran are no longer willing to go to Syria to fight, leaving the Iranian regime short of much needed forces to prop up Assad.

Obama calls for talks with Iran over Iraq