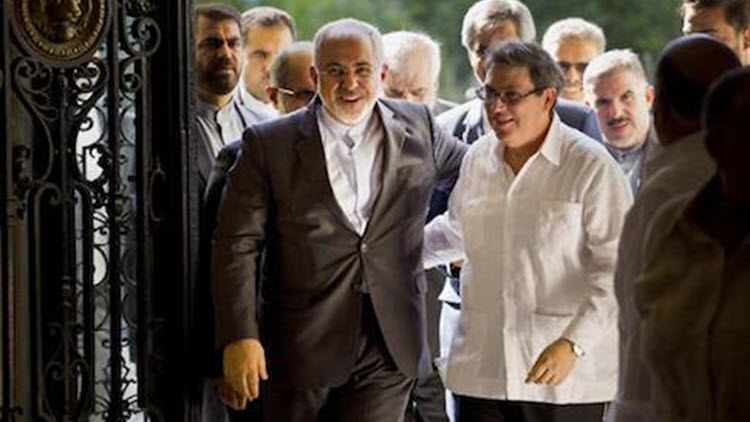 London, 26 Aug – There are growing concerns in Washington that Iran is expanding its terror network among South American countries hostile to the US, during a visit to the area by the Iranian Foreign Minister, according to the Washington Free Beacon.

During the tour, Javad Zarif has visited Cuba, Venezuela, and other countries that are believed to be sheltering Iranian-funded terrorist organizations like Hezbollah.

While in Cuba, Zarif promoted Iran’s desire to ally with anti-American countries.

He said: “Iran and Cuba could prove to the U.S. that it cannot proceed with its policies through exerting pressure on other countries…Now the time is ripe for realizing our common goals together and [to] implement the resistance economy in Iran and materialize Castro’s goals of reconstruction of the Cuban economy.”

Russia, an Iranian ally, has also boosted its spy operation in the area and US officials are worried about the potential this has to foster anti-US sentiment in the area.

A US Representative from Florida, Ileana Ros-Lehtinen, made a statement about Zarif’s tour.

Ros-Lehtinen, who is also chair of the House Subcommittee on the Middle East and North Africa, said: “The threat to U.S. national security interests and our allies should be setting off alarm bells…I urge the White House to stop downplaying the Iranian threat and take immediate action to prevent the world’s leading state sponsor of terrorism from establishing a regional safe haven in the Americas”.

She added: “Tehran’s classic playbook is to use cultural centers, new embassies or consulates, or cooperative agreements on various areas to act as façades aimed at expanding Iran’s radical extremist network”.

Behnam Ben Taleblu, a senior analyst on Iran at the Foundation for Defense of Democracies, said that Iran has boosted collaboration efforts with South America after 2015’s nuclear agreement.

He said: “Zarif is aggressively continuing Iran’s diplomatic outreach, a policy which began early in the Rouhani administration and was kicked into high gear in the aftermath of the JCPOA—last summer’s nuclear deal… Zarif’s trip symbolically commences in Havana, Cuba, where the Iranian foreign minister harped on themes of steadfastness and resistance to American legal and economic pressure.”

He added that Iran wanted to promote “an anti-American and anti-capitalist world order” and “solidify the anti-American political orientation” of some South American countries.

He ended: “In short, Iran will be looking to deepen to its footprint in Latin America”.

Iran says no need for UN watchdog office in Tehran

AFP: A senior Iranian official Saturday dismissed the need for...

Iran Joins UN Commission on the Status of Women

These days beside the news about the coronavirus, wars,...