IRAN: IRGC member killed under torture after refusing to fight in Syria 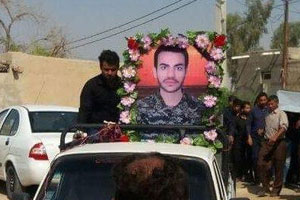 The Iranian Regime has tortured and killed one of its own Revolutionary Guards because he refused to fight in the Syrian Civil War.

Rather than try him in a military court, Intelligence officers tortured him to death.

They then delivered his body to his family in Ahvaz, South Iran. According to reliable sources, the relatives of the victim noted bruises on his neck, hands and feet and torture marks of the rest of his body.

His funeral was held on Sunday morning with security forces observing.

The IRGC have not accepted responsibility, attempting to cover up his murder with contradictory tales of both a heart attack and hanging himself in his cell.

The IRGC had previously detained some Balochi citizens for refusing to fight on the side of Bashar al-Assad in the Syrian Civil War. They refused because of a fatwa issued by a Sunni scholar banning participation in the war.

Also, protests against Iran’s involvement in Syria have been reignited by political prisoners in Iran; stating that the cost of the war is harming Iranian citizens.

Reuters: Iran said it would set up an embassy...

Bloomberg: Iran will lead a club of the world’s...