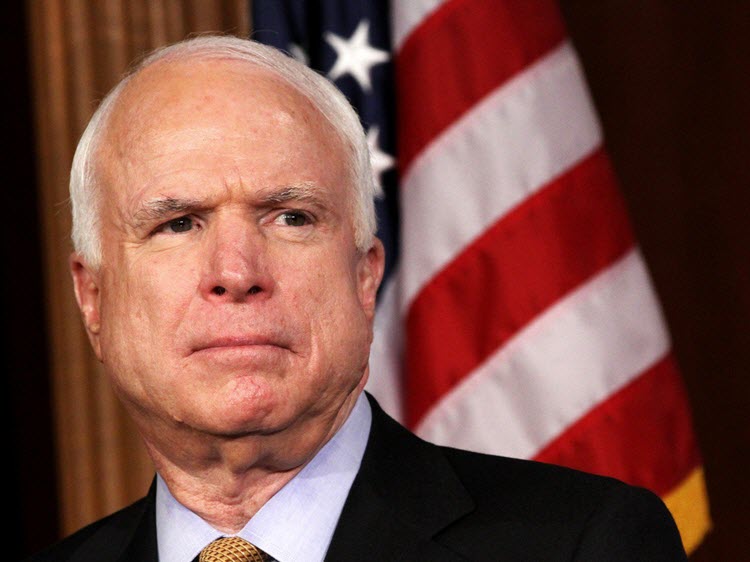 London, 10 Dec – Hardline Republicans, who were critical of the Obama administration’s outreach to Iran throughout his presidency were optimistic as they took over a Senate caucus room on Thursday to promote their cause. This is because they believe that the incoming administration under Donald Trump, understands the threat posed by the Iranian regime far better than President Obama did.

David R. Sands writes in an article for the Washington Times on December 8, that Senate Armed Services Committee Chairman John McCain and Democratic Sen. Robert Menendez, member of the Senate Committee on Foreign Relations, were among the lawmakers saying that Mr. Trump and his team will be skeptical of Iran and ready to call out any violations of the nuclear deal Mr. Obama helped negotiate in 2015.

Mr. McCain said he was pleased by Mr. Trump’s choice of James N. Mattis to head the Defense Department. He stated that the retired Marine general was deeply familiar with the threat posed by Tehran to the U.S. and its regional allies. General Mattis has criticized the Iran nuclear deal as “imperfect” and in a speech, said that “the Iranian regime, in my mind, is the single most enduring threat to stability and peace in the Middle East.”

Mr. McCain said further, “I don’t know, frankly, what Donald Trump wants to do [about Iran], but I do know the people he has selected so far for major positions I’ve been very pleased to see.”

“There is every reason to believe and be hopeful that the president-elect will take a new set of eyes and a new approach to this theocracy. I’m very hopeful that will happen,” former Pennsylvania Gov. Tom Ridge, the first secretary of homeland security, told the briefing on the policy options for Iran.

This event on Capitol Hill was put together by the Organization of Iranian American Communities. It is another major move forward for one of the largest sponsors of the event, the Paris-based National Council of Resistance of Iran and the NCRI’s largest component, the Mujahedeen-e Khalq (People’s Mujahedeen of Iran), or MEK, the secular coalition that broke with other elements of the coalition that toppled the Shah of Iran in the 1979 revolution, and has operated in exile ever since.

The MEK was placed on the State Department’s list of terrorist organizations in the mid-1990s but, backed by a growing number of supporters on Capitol Hill, was removed from the list in 2012. MEK officials say they remain committed to the overthrow of the theocratic regime in Tehran in favor of a new secular, democratic government. They are fierce opponents of the Islamic republic regime in Tehran and a source of many of the intelligence scoops detailing Tehran’s clandestine nuclear programs.
Camp Liberty, a onetime U.S. military base in Iraq became a holding post for over 3,000 MEK members, the last of whom left Iraq this fall, many having been taken in by the government of Albania.

Former Senator and Democratic candidate for vice president in 2000, Joseph Lieberman, said that he had voted for Hillary Clinton but that Mr. Trump’s surprise election, coupled with strong congressional majorities critical of the Iranian regime, could mean a major change in Iranian policy in the months ahead. “I really think a new day is dawning for the cause of a free, stable, independent and democratic Iran,” said Mr. Lieberman, who noted the resolution of the Camp Liberty standoff means the NCRI “can focus on resistance and changing the regime” in Iran. “Elections have consequences,” Mr. Lieberman said. “I can tell you, when it comes to Iran, the change from Barack Obama to Donald Trump is a very hopeful one. Now we go to an administration that is not protective or defensive of the Iran agreement, but is ready to challenge it.”

Although sharply critical of the deal, Mr. Trump has been unclear on whether he would scrap it or take a far more aggressive approach to enforcing it and calling out Iranian violations.

Many of the other signatories to the deal have been actively exploring business opportunities with Iran, in the energy sector and beyond.

Iran has issued warnings against any move scrap the nuclear deal. Iranian President Hassan Rouhani said just this week Mr. Trump “may wish many things, he may wish to weaken or tear up [the nuclear deal], but will we and our nation allow such a thing? America cannot influence our path of strength and endurance.”

Iran has already violated both the letter and the spirit of the deal, say Mr. McCain and other critics of the deal, and there’s been little sign that Tehran has modified its policies or stopped sowing instability from Syria to Yemen.

Sands concludes, “Mr. Lieberman said Mr. Trump and the Republican-dominated Congress could take a number of steps to check Iran’s aggressiveness short of tearing up the nuclear deal, including new unilateral sanctions and designating Iran’s Revolutionary Guard Corps, the military unit specifically charged with defending the country’s Islamic theocratic system, as a terrorist organization. The sanctions could hurt, because the IRGC has built up a major business empire in addition to its military operations.”

Iran’s parliament signs off on $508 billion budget based on oil price at $81.5 a barrel