Arms Shipments Seized on Route to Yemen May Be Iran-Made 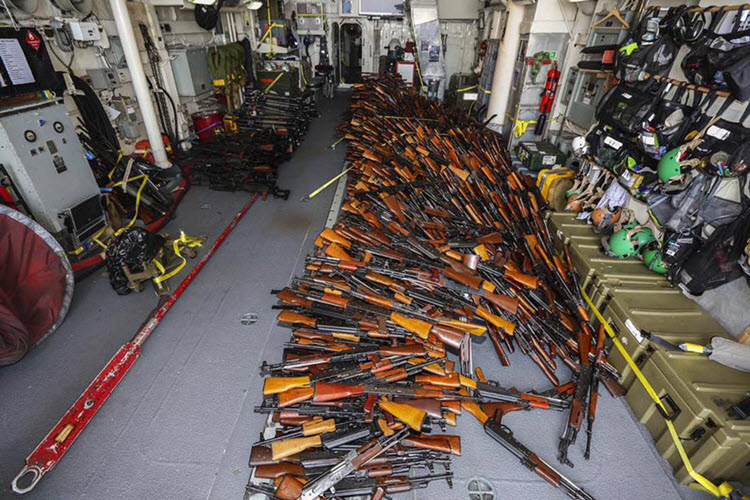 London, 12 Jan – The arms shipments seized off the coast of Yemen in 2016, appear to be Iranian-made according to arms experts.

Photographs of the shipment were released by the Australian government showcase characteristics of Iranian-made rocket-propelled grenade launchers previously documented in Iraq and the Ivory Coast, according to Matthew Schroeder, an analyst for the Small Arms Survey.

Schroeder said: “The seizure appears to be yet another example of Iranian weapons being shipped abroad despite longstanding U.N. restrictions on arms transfers from Iran.”

The light anti-armour weapons, including at least nine rocket-propelled grenade launchers, were seized by Australian authorities from a smuggling vessel last February.

Iran has a long history of supplying arms to fuels the Houthi rebels in Yemen; while the USA and other Western governments have supported the government and their allies. The Yemeni conflicts have caused over 10,000 civilian casualties according to the UN.

The Iranian Regime was unavailable to comment as they are currently in national mourning for the death of their former president, but in the past, they’ve refused to respond to questions regarding weapons smuggling.

Last year, a report by a private weapons consultancy firm, Conflict Armament Research, pointed to evidence of a weapon’s pipeline from Iran to Somalia to Yemen.

Iran is violating UN resolutions against itself by exporting weapons, but this is far from the first time. According to the USA, Iran regularly supplies arms to Iraq, Syria, Yemen and terrorist proxies like Hamas and Hezbollah.

Four separate arms shipments from Iran to Yemen were discovered between September 2015 and March 2016.

Vice Adm. Kevin M. Donegan, the commander of the Navy’s Fifth Fleet, explained that there were likely more shipments from Iran to the Houthis that were not caught.

US condemns stoning executions in Iran