Another reason to designate the IRGC as a terrorist group 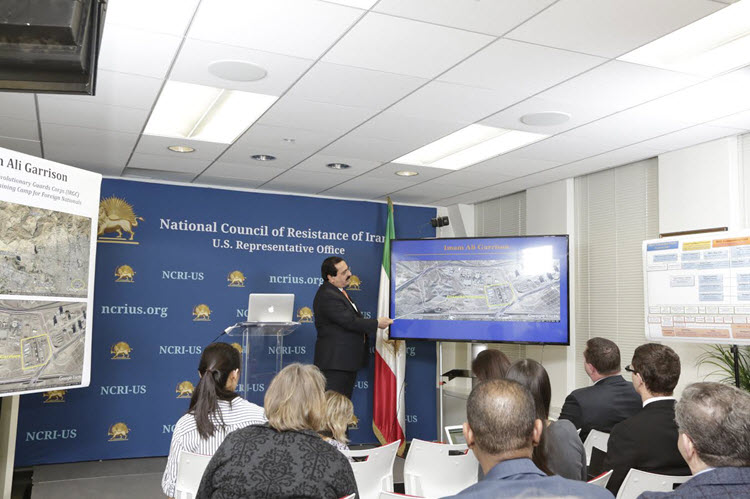 London, 16 Feb – As the Trump administration debates whether to designate the Iranian Revolutionary Guards (IRGC) as a terrorist organisation, the National Council of Resistance of Iran (NCRI) provided some new information about the IRGC’s drive to train its latest recruits. The training is so that the new members can go and fight for Iran’s proxy terrorist groups that are scattered across the Middle East.

The Deputy Director of the NCRI’s US Representative Office, Alireza Jafarzadeh, gave the news at a press conference earlier this week. The information was gathered by the People’s Mojahedin Organization of Iran’s (PMOI/MEK) extensive network.

Mr. Jafarzadeh advised: “By means of its Revolutionary Guards Corps, the mullahs’ regime creates or at the very least expands and strengthens extremist forces, both Shia and Sunni.”

Peace and security across the Middle East is in constant threat because of the IRGC and its spread of terrorism. The IRGC gained so much following the Obama administration’s policy of appeasement. President Obama turned a blind eye to the many violations of agreements, provocations and threats from Iran which just emboldened the country. Senior commanders of the IRGC mentioned that the US is a “paper tiger” – all talk and no action.

However, this is no longer the case. President Trump and several members of his administration have vowed to put an end to Iran’s behaviour. They recognise that Iran’s presence in other nations is very dangerous and understands the severity of the country’s ballistic missile and nuclear programs as well as the horrific human rights violations.

Several American citizens are currently being held in custody by IRGC intelligence. As is often the case in Iran, the charges are normally either vague or bogus.

The IRGC is a big player in the crackdown at home too. The people of Iran are crying out for democracy and freedom and the IRGC is oppressing them through extreme repressive measures. Women and young people are treated just as harshly as men.

Iran’s economy is somewhat controlled by the IRGC too, therefore designating the group as terrorist will help to halt or slow down the spread of terror and related activities. The IRGC has the same attitude and behaviour as those ruling and running the country.

Certain individuals believe that the IRGC will retaliate against the actions of the US administration if it were to be designated as a terrorist group, however many experts believe this is not what will happen. The IRGC has the interests of the Iranian regime at the top of its agenda, so it is expected that policies will be amended.

It appears that the Iranian regime is already starting to understand that the Trump administration is less tolerant than the Obama administration. At the beginning of President Trump’s time in office the Iranian regime wanted to test his resolve by test-firing a ballistic missile. However, a second test-firing was cancelled, prompting claims that Iran is hesitant to push President Trump too far.

If Tehran was able to continue its destruction in the Middle East without being challenged, it would. However, it needs to be stopped in its tracks and it is very likely that the most logical next step is to designate the IRGC as the terrorists they are.

Wall Street Journal: Iran and the U.S., in their...