Iran Regime Covers up Death of Over 10,000 IRGC Fighters in Syria 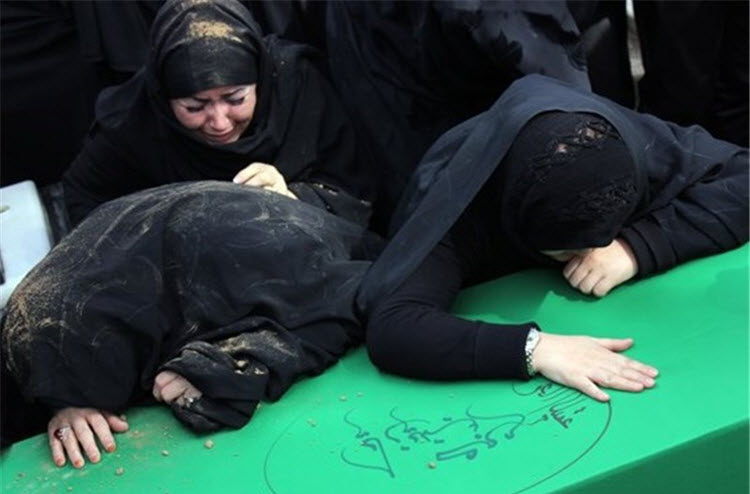 London, 8 Mar – At least 10,000 fighters from the Iranian Revolutionary Guards (IRGC) have died in Syria fighting for the Assad Regime but they are being secretly buried and their families are being told that the men are still alive, according to Iranian Resistance forces.

In order to trick the Iranian people into thinking that the war is going well, the Regime has only confirmed a small amount of the actual deaths.

Seyyed Mohammad Ali Shahidi Mahallati, deputy president and the supreme leader’s representative in the Martyrs and Veterans affairs foundation, told the Regime-affiliated Tasnim news agency in November that only 1,000 had been killed.

Even those families, who have been told that a fighter has died, have been treated poorly by the Regime.

However, the Iranian Resistance, who previously uncovered Iran’s secret nuclear weapons programme, revealed that many forces are being buried in secret graves in Syria.

When you add the IRGC forces and their mercenaries together, you find out that over 10,000 fighters have died, with the majority of their deaths being covered up.

The Iranian mullahs propping up the failing Assad Regime because they know that if the Syrian dictator falls, they will be next. They may not have long to wait, considering how people felt about the war.

Mostafa Tajerzadeh, a political prisoner, wrote: “We had an intervention in Syria full of loss with little profit… no country has had so many casualties in Syria as Iran…Despite the toll, we are accused of killing the Syrian people and pursuing sectarianism. Our credibility is damaged, and every day we go deeper into the Syrian quagmire.”

Mehdi Khazali, former Counsel of Guardians member, Abolghasem Khazali, said: “Wasn’t the eight-year war (with Iraq) enough, now we have been fighting in Syria for five years; it was a mistake and shouldn’t happen, and I have said this many times before…In fact, the war has occurred and we are engaged in this quagmire, and we are engaged with the issue of ISIS which was created due to mismanagement of Haj Ghasem Soleimani. Hadn’t he done this, there wouldn’t have been ISIS…this is the mistake of Haj Ghasem Soleimani.”

In January 2016, Human Rights Watch accused the IRGC of recruiting thousands of Afghani, Iraqi, and Pakistani refugees in Iran for military service since 2013 and promising citizenship for the refugees and their families.

Iran’s Research Center Ara: 2019 Was Exceptional in Terms of Threats in the Last Four Decades

By Jubin Katiraie The state-run news agency Mizan on 14...