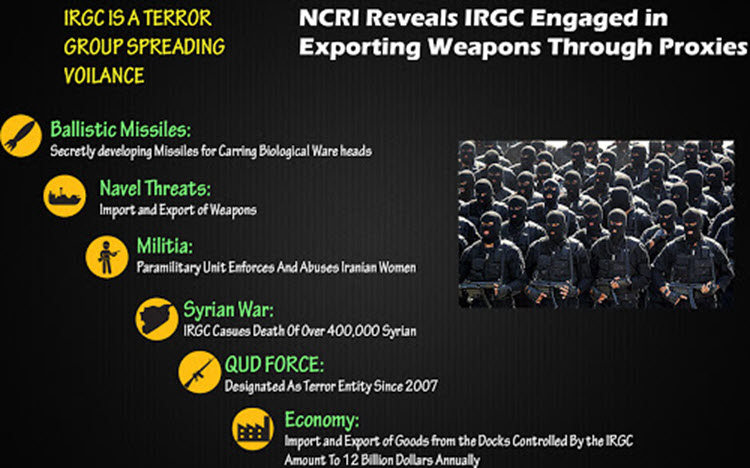 London, 9 Mar – Iran’s terror squad, the Revolutionary Guards Corps (IRGC), has been smuggling weapons and other illegal goods through three front companies to terrorists in Yemen.

The National Council of Resistance of Iran (NCRI) said that the money gathered helps the IRGC to fund terrorism at home and abroad.

At the press conference in London on March 7, the NCRI also announced that 45% of Iranian docks are under IRGC control and illegal goods transported through there are worth $12 billion annually. The supreme leader, Ali Khamenei, pressed for IRGC expansion, with governmental oversight, to evade international sanctions.

The NCRI said: “The IRGC is, therefore, a comprehensive economic set up that virtually controls the bulk of Iran’s export and import. Exclusive use and control of a major part of the docks in Iran is a key element in its set up”
The companies.

• owned by the children of Ali Shamkhani, Secretary of the Supreme National Security Council, a former Commander of the IRGC Naval Force and former Minister of Defence

This information was gathered by the People’s Mojahedin Organization of Iran (PMOI/MEK), who have provided the West with many previous offences by the Iranian Regime, including their secret nuclear programme in 2002, and most recently their terror training camps across Iran.

The conference also included the release of a joint study by European Parliament’s Delegation for Relations with Iraq (EIFA) and the International Committee in Search of Justice (ISJ) titled, “Destructive Role of Islamic Revolutionary Guards Corps (IRGC) in the Middle East”.

Also in attendance at the conference was Dr Matthew Offord, Conservative MP.

Bloomberg: Many Obama administration foreign policy decisions, including the...