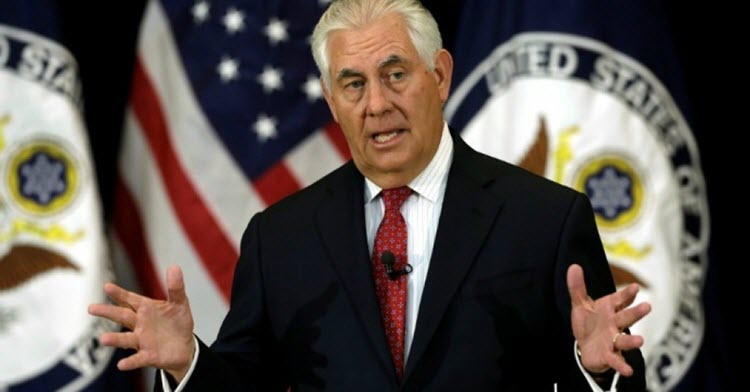 London, 5 May – The “brutal assassination” of an Iranian television executive in Istanbul carries all the trademarks of a clandestine operation by Iran’s Islamic Revolutionary Guards Corps (IRGC), writes former European lawmaker Struan Stevenson for the United Press International.

Stevenson wrote on Wednesday that the regime in Tehran “is no stranger to violence”.

U.S. Secretary of State Rex Tillerson recently accused Iran of being “a leading state sponsor of terror through many platforms and methods.” The Americans are particularly concerned about the activities of Iran’s Islamic Revolutionary Guard Corps and their extra-territorial wing the Quds Force, who are engaged in every conflict in the Middle East.

The IRGC are the main backers of Bashar al-Assad’s bloody civil war in Syria, the brutal Shi’ia militias in Iraq, the Houthi rebels in Yemen and the terrorist Hezbollah in Lebanon. There is talk in Washington that the United States may shortly designate the IRGC as an international terrorist organization. Meddling in the internal affairs of other countries and particularly exporting terrorism and fundamentalism, represents a strategic pillar for Tehran’s survival and endurance.

But now the fascist regime in Iran has resorted to even more desperate tactics. The cruel assassination of a young television executive in Istanbul last week has unveiled a new and ruthless strategy to silence all critics. Saeed Karimian, a 42-year-old Iranian-born TV mogul and director of GEM Group, a Persian-language satellite TV network, was gunned down together with his Kuwaiti business partner in Istanbul on Saturday evening.

The brutal assassination carries all the trademarks of an IRGC clandestine operation. Karimian’s GEM satellite TV network beams Westernized soap operas and other cultural programs into Iran. Such broadcasts are of course deemed toxic and anti-Islamic by the mullahs and for a number of years they have carefully laid the groundwork for his assassination by spreading fake news about the TV mogul.

Absurdly, the regime repeatedly accused Karimian of being a key member and supporter of the main Iranian opposition group, the People’s Mojahedin of Iran (PMOI or MEK), on several occasions publishing a fake photograph of him standing alongside the Iranian opposition leader Maryam Rajavi.

In fact, the photograph was taken in the Belgian Senate on March 27, 2013, when Rajavi met with MEP Gerard Deprez and other Belgian politicians. Karimian’s face was crudely doctored over the image of Deprez. But the mullahs used this as evidence of Karimian’s alleged “treachery,” despite the fact that the TV mogul was never involved in politics and had no connection whatsoever with the MEK.

Notwithstanding denials of their involvement in the assassination, it was perhaps revealing that the regime’s key news agencies were able to report the exact nature of the killing and even the fact that Karimian had been machine-gunned in his car by unknown assailants and that the assassins’ burned-out getaway car had been found on the outskirts of Istanbul, before any such information was released by the Turkish authorities.

The killing of Karimian is symptomatic of the new paranoia gripping the theocratic regime. Indeed, such is the palpable alarm in Tehran at the hard-line approach to their vicious regime from the Americans that the ruling mullahs are now beginning to thrash around like dangerous wounded animals. After eight years of hand-wringing appeasement by the Obama administration, the litany of human rights violations within Iran has accelerated. More than 3,000 people have been executed since the “so-called” moderate Hassan Rouhani took office as president in 2013. Ten executions have taken place in the past week and a 22 year-old man has been sentenced to have his hand amputated. Two women were hanged on Wednesday.

The turbaned tyrants in Tehran fear another uprising, similar to what the regime refers to as the “sedition” that took place following the fraudulent second election of Mahmoud Ahmadinejad in 2009. With presidential elections looming on May 19, they are terrified that hundreds of thousands will once again take to the streets to protest the oppression and corruption that have been the hallmarks of the Iranian regime since they seized power following the 1979 revolution.

The regime has wrecked the Iranian economy, impoverished its people and responded to criticism with medieval violence and brutality. The visible opulence and corruption of the millionaire mullahs who have drained the country’s resources and oppressed the Iranian population, while exporting terror across the zone, has turned Iran into a ticking time-bomb, ready to explode at the slightest spark.

Fake news, lies and murderous attacks are the characteristic signs of a regime clinging to power by its fingernails. The killing of Karimian may yet become the final milestone in the blood-soaked journey of this cruel and pious dictatorship.

AFP: The top US commander in Iraq said Wednesday...