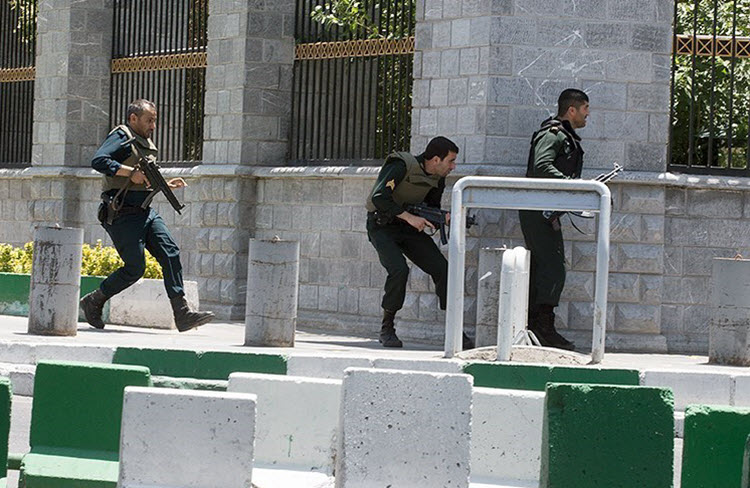 London, 13 Jun – Behnam Ben Taleblu, from the Foundation for Defence of Democracies, wrote an op-ed for Track Persia in which he dissected the strange and disjointed response from members of the Iranian Regime following last week’s terrorist attacks in Iran by ISIS.

Some officials, like Supreme Leader Ayatollah Khamenei, have tried to downplay the attacks, which have so far killed 17 and injured 40, and defend the Iranian military presence in other Middle Eastern countries.

There were five attackers, according to both the Regime and ISIS, who were subsequently arrested but worryingly, the Regime has not been clear on who the attackers were or where they came from.

There are even conflicting stories by officials surrounding the attack which Taleblu reports could indicate that the Regime was caught off guard.

The Interior Ministry claim the attack started at 10.30 am local time with four attackers dressed in women’s clothing, while the Islamic Revolutionary Guard Corps (IRGC) claim that three attackers opened fire at 10.15 am while security guards at the Regime’s Parliament checked bags.

Worse still are the allegations from the Iranian officials that Saudi Arabia and the US was somehow involved, with ministers taking comments out of context and presenting them as proof, while Mahmoud Alavi, Iran’s Minister of Intelligence, said that they couldn’t be sure if the two countries were involved.

What does seem clear is that the attackers joined the so-called Islamic State and traveled to Raqqa and Mosul meet their fellow terrorists. They returned to Iran last August under the command of Abu Ayesheh, who was killed by the Regime’s security services last year. It is then that the attackers began plotting this attack.

Taleblu wrote: “The Islamic State has recently campaigned for violence against the Islamic Republic. In a March video, the group’s Iraqi Wilayat Diyala branch threatened to attack Iran and called on Iranian Sunnis to rise. This was followed by additional calls for violence in the group’s propaganda.”

Iran has now increased its troops to fight ISIS in Syria and Iraq, but if it really wants to defeat the terrorists, it needs to stop funding and training terrorists.

US Sanctions on Iran-Backed Hezbollah Come Into Force

UPI: Iran is building a secret tunnel in Tehran...