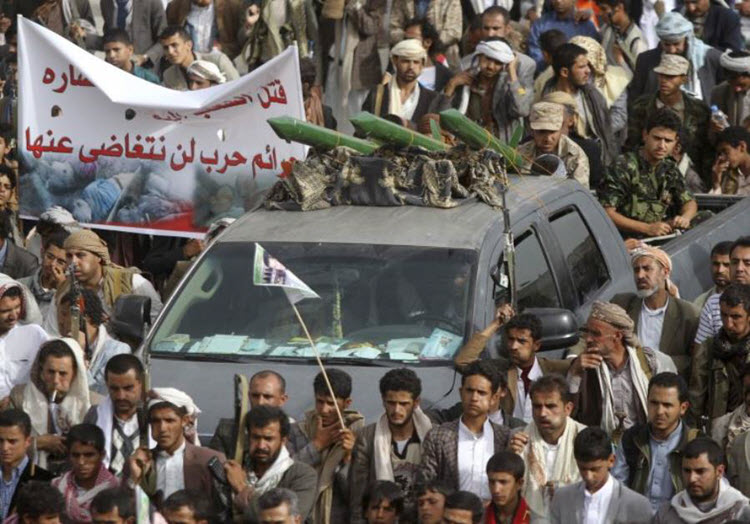 London, 3 Aug – The new secret routes used by Iran to smuggle weapons to the Houthi terror cell have been uncovered in a new report by Reuters.

For the past six months, the Iranian Regime has been using the waters between Kuwait and Iran to evade the embargo on arms shipments to the terrorist group in Yemen, according to both Western and Iranian sources.

A senior Iranian official said: “Parts of missiles, launchers and drugs are smuggled into Yemen via Kuwaiti waters. The route sometimes is used for transferring cash as well.”

The official explained that the smuggled parts cannot be produced in Yemen. The Iranian Regime is also smuggling cash and drugs (which can be sold) to the Houthis.

They are using sending the shipments from smaller Iranian ports which are subject to less scrutiny; even switching off their identification transponders to avoid detection.

Iranian ships transfer the equipment to smaller vessels at the top of the Gulf, where there is less security and the transfer of shipments take place in Kuwaiti waters and international shipping lanes.

Former British Royal Navy captain Gerry Northwood, who now works at the maritime security firm MAST, said: “(The territorial waters of) Iran, Kuwait and Iraq in the northern Gulf butt up against each other. There is still plenty of room for smugglers to operate. In fact the whole Gulf is a hive of small boat activity. And this is in an area where one man’s illegitimate trade is another’s legitimate trade.”

A second Iranian official also noted that the Iranian Regime’s personal terror squad, the Revolutionary Guards Corps (IRGC) are heavily involved in the arms smuggling, giving more credence to the notion that the international community should blacklist the IRGC.

The official said: “No activity goes ahead in the Gulf without the IRGC being involved. This activity involves a huge amount of money as well as transferring equipment to Iranian-backed groups in their fight against their enemies.”

Currently, Yemen is in the midst of a two-year long civil war in which the Houthis are against the government of President Abd-Rabbu Mansour Hadi; more than 10,000 people have died in the fighting and a further 300,000 are infected with cholera due to an outbreak and lack of access to medical care.

The Houthis need a constant supply of weaponry in order to keep up the fighting, otherwise they would be crushed by the Yemeni government, which is backed by the international community.

The Guardian: Britain yesterday demanded the return of 15...

Iran Is a Living A “Great Illusion”