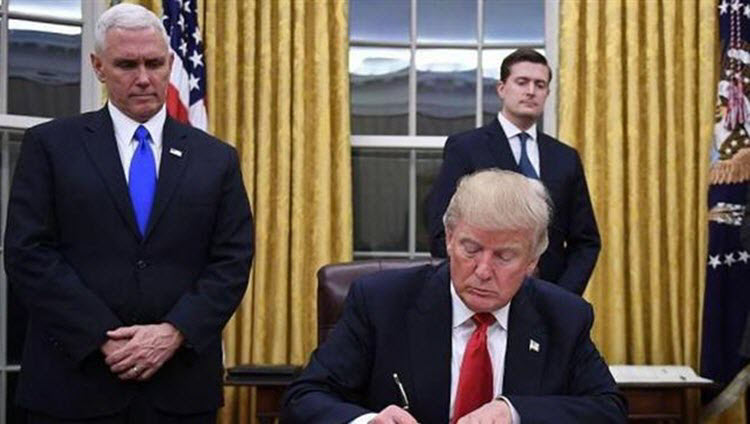 The newly-enacted law adds sanctions to anyone involved in Iran’s ballistic missile programme, including those who “manufacture, acquire, possess, develop, transport, transfer, or use such capabilities”.

It also places sanctions on anyone involved or affiliated with the Iranian Revolutionary Guards (IRGC), which the US says “is the primary arm of the Government of Iran for executing its policy of supporting terrorist and insurgent groups”.

In addition, it gives the US Secretary of State the power to compile for sanctions a list of Iranian individuals who have committed human rights abuses.

The opposition National Council of Resistance of Iran welcomed Trump’s decision to sign into law the new legislation.

It called for the new law to be “implemented immediately, meticulously and without exception”.

The NCRI also urged the European Union to join onto these sanctions.

An NCRI statement on 2 August added: “The expulsion of the IRGC and its affiliated militias from the Middle East, in particular from Syria and Iraq, is indispensable to the enactment of this law and a prerequisite to ending the conflict and crisis that have engulfed the entire region”.

“This law that was passed last week by the US House of Representatives and Senate with overwhelming majority imposes new sanctions on the clerical regime for violations of human rights and proliferation of ballistic missiles. The new law also imposes new sanctions on the IRGC by placing it on the list of ‘Specially Designated Global Terrorists.’ This list was created subsequent to September 11, 2001 based on an Executive Order of the US President”.

“The terrorist designation and sanctions against the IRGC should have taken place a long time ago since the IRGC protects the entirety of the clerical regime. It also acts as the regime’s main instrument of suppression and export of terrorism and extremism. However, the policy of appeasing the mullahs’ religious dictatorship paved the way for rampage in the entire region by the IRGC and its proxies”.

Last week after the Senate adopted the sanctions bill, Maryam Rajavi, President-elect of the NCRI, said in a statement: “The full implementation of these sanctions against the clerical regime must be completed with urgent actions against officials in charge of executions, torture and particularly the massacre of political prisoners in 1988. Topping the list is Ali Khamenei, the mullahs’ supreme leader. They must face justice for 38 years of crimes against humanity. Recognition of the Iranian people’s desire and right to overthrow the mullahs and establish democracy and freedom in Iran is the greatest contribution to peace and tranquility in the Middle East and the world”.

Based in part on outside reports

Paris Conference: Call for Justice for Perpetrators of Crimes Against Humanity in Iran, and Syria