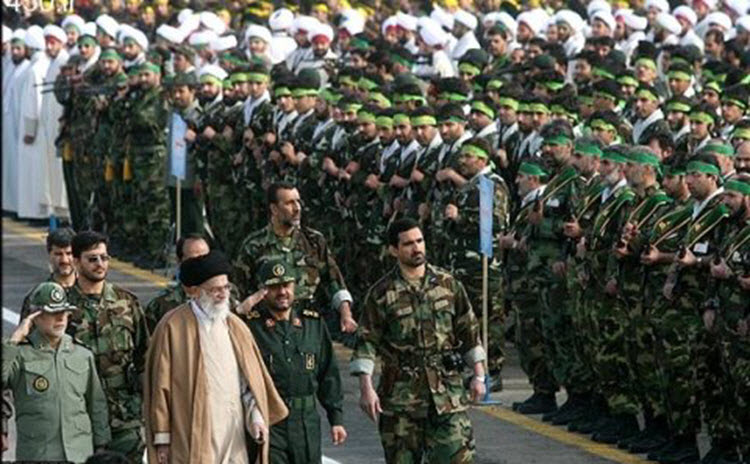 London, 13 Oct – Iran’s Islamic Revolutionary Guard Corps (IRGC) are watching from the sidelines as U.S. President Trump prepares to make his announcement regarding U.S. policy toward Tehran and the fate of the Joint Comprehensive Plan of Action (JCPOA). This is because, reportedly, Trump is also expected to designate the IRGC as a terrorist organization.

While individuals and entities associated with the IRGC are already on the U.S. list of foreign terrorist organizations (FTO), the IRGC itself is not.

The elite group has apparently begun to target potential rival entities in Iran.

The IRGC commander in Kerman Province admitted that the Guard is responsible for arresting the brother of Rouhani’s vice president. The IRGC-affiliated Tharallah commander, Gholam-Ali Abu Hamza, also called on the people of Kerman to protest the Executives of Construction of Iran Party (ECIP) for “monopolizing” all facilities available in Kerman.

A pro-Rouhani political party, ECIP was founded by 16 members of the cabinet of President Akbar Hashemi Rafsanjani in 1996. ECIP is also a member of the Council for Coordinating Reforms Front, which supports Rouhani’s government. Rouhani’s current first deputy, Eshaq Jahangiri, is a member of the party.

In his contentious speech, Hamza insisted that business companies related to ECIP spokesman Hossein Marashi should be accountable to the IRGC’s branch in Kerman and report their activities and cash flow. He stated that many large companies in Kerman, including Mahan Air and Kerman Motors, are dominated by the EICP. He warned, “We have already sent them a message and, once again, I am calling on them to come forward, be accountable, and present their records and balance sheets; otherwise, the IRGC will confront you.”

Marashi, former MP and governor-general of Kerman, is the founder of many industrial and investment corporations in the province.

Reportedly, Hamza threatened the EICP, “We (the IRGC) will return to the treasury all properties and wealth that you have illegally amassed so far.”

Hamza’s speech was so controversial that just hours later, Tasnim took it down from its site. His unexpected comments, as well as the restrictions on Khatami, come at a time when the IRGC and Rouhani have apparently declared a ceasefire.

Recently, President Rouhani portrayed the IRGC as “beloved” by the Iranian, Iraqi, Syrian, and Lebanese people.

While it appears that the IRGC is avoiding a direct attack on Rouhani, still it threatens his closest allies — those who may potentially be in favor of Tehran’s interactions with Washington.

By Pooya Stone An Iranian publication has published details...

UPI: Iran's development of its most advanced ballistic missile...