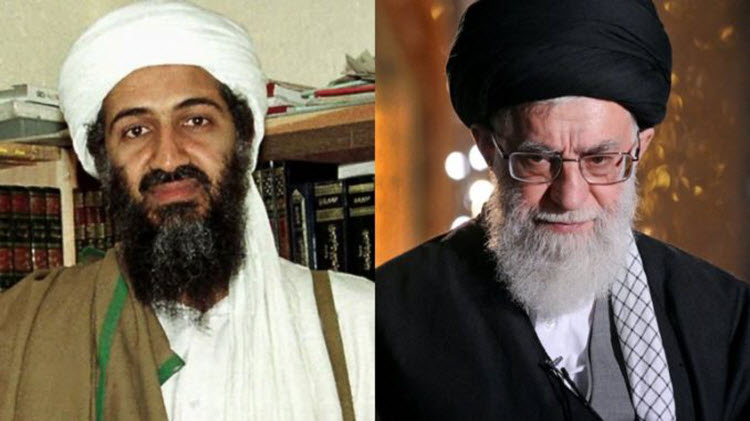 London, 6 Nov – A strong relationship between the Iranian Regime and Al-Qaeda has long been suspected, but recently released documents, seized during the 2011 raid on Osama bin Laden’s Pakistan complex, confirm it.

The documents, released last week by the CIA, show a long history between the leading state sponsor of terrorism and the terror cell dating all the way back to the early 1990s.

Many who seem surprised about this mutual relationship are hung up on the Sunni/ Shiite ideological divide between the terrorist group and the rogue nation, but instead of focusing on their differences, experts should focus on what they had to offer the other.

The Iranian Regime saw that Al-Qaeda could help them achieve their two main revolutionary ideals: anti-Americanism and undermining Saudi Arabia’s interests, while Al-Qaeda needed money and training in order to actually carry out large-scale terror attacks like 9/11.

So, the two struck a deal. Iran would use its proxy terrorist group Hezbollah to provide money, weapons and bombs, and its Revolutionary Guard Corps, elite Quds Force and Ministry of Intelligence would assist, while Bin Laden would teach his followers to admire the Iranian Regime. This was even linked together by the Clinton administration in their first federal indictments of Al-Qaeda.

Thanks to Iran’s help, Al-Qaeda was able to carry out its first known terrorist attack against the Gold Mohur hotel in Yemen in December 1992. The following year, they attacked the World Trade Center in New York.

Then Iran offered Al-Qaeda more training in Hezbollah camps and more funds if they targeted American interests in Saudi Arabia. That is how Al-Qaeda learnt its MO of vehicle bombs, suicide bombs and multidimensional attacks simultaneously on several targets.

In 1998, Al-Qaeda carried out its first large-scale attacks using truck bombs at US embassies in Nairobi, Kenya, and Dar es Salaam, Tanzania, in which over 200 people died.

Shortly before the 9/11 attacks, the Iranian Regime repeatedly allowed Al-Qaeda operatives to cross their border without visas or passports and even sheltered high-ranking Al-Qaeda operatives involved in the planning of 9/11 in order to hide them from the US.

This latest document reveals why Al-Qaeda never attacked Iran despite their religious differences. You don’t bite the hand that feeds you.

Dr. Majid Rafizadeh, a political scientist and Iran expert, wrote on Arab News: “Iran should be held liable for terrorist attacks carried out by Al-Qaeda that resulted in thousands of innocent people losing their lives. The Iranian leaders who were engaged in these heinous acts should be brought to the International Criminal Court. The regime should be sanctioned and isolated. If it were not for Iran and Hezbollah, Al-Qaeda would have not had the chance to blossom and carry out its terrorist attacks.”