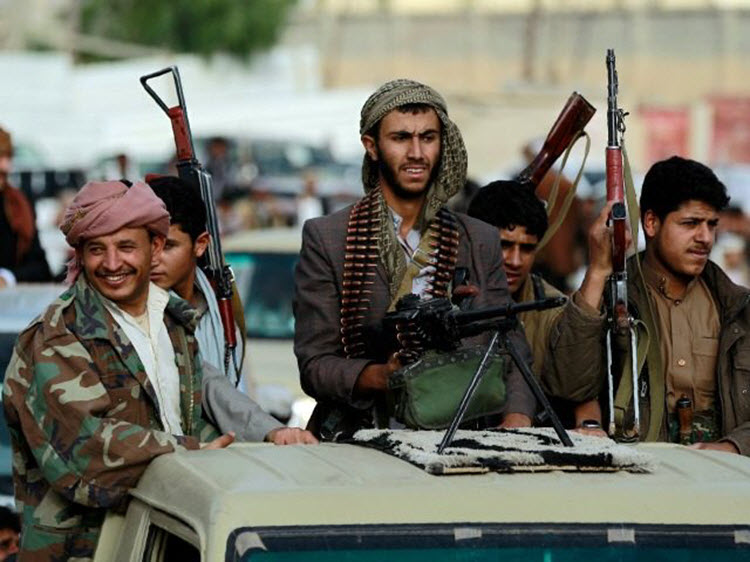 London, 18 Nov – The Houthis, a Yemeni terrorist cell, has been affiliated with the Iranian Revolutionary Guard Corps (IRGC) for over 20 years, much longer than most people know.

They have been groomed by the Iranian Regime to fight against the legitimate Yemeni government and the Saudi-led coalition in charge on restoring the internationally recognised leader President Abd Rabbo Mansour Hadi, as part of the Regime’s plan for complete regional domination.

Over time, the Houthis grew more and more similar to other Iranian proxy groups in the Middle East, being given the same training, weapons, and propaganda materials as the rest of them. They even chant the same slogan: “Death to America, Death to Israel, Curse on the Jews, Victory to Islam.”

However, the Houthis differ greatly from Hezbollah, Iran’s closest proxy, in one key way. The Houthis make up less than 5 percent of Yemen’s population.

Still the Iranian Regime has been instrumental in the dramatic military growth of the Houthis over the past three years.

The Regime wants the Houthis to eventually control Yemen in the same way that Hezbollah is controlling Lebanon. That way Iran can run both countries through their proxy groups.

The Houthis have even started conscripting boys as young as 11 in areas under their control into the fight against the legitimate government; executing those who refuse. This internationally sanctioned war crime is right out of Iran’s playbook.

The Houthis also focus on propaganda depicting Saudi Arabia, America and Israel as the enemy, while closing down independent media outlets; something the Iranian Regime is famous for.

Abdulrahman Al-Rashed, the former general manager of Al Arabiya news channel, wrote: “Iran transferred its experiences in conscription and propaganda to their Houthi followers in Yemen, and they trained them in funding methods and creating other financial resources for the militia.”

The Houthis are funding their illicit activities through a mixture of money from the Iranian Regime and illegal taxation (which basically amounts to extortion) of imports and exports in areas under their control, like the Al-Hodeidah port and all fuel-selling points.

The Iran-backed Hezbollah helped to restructure the Houthis in order to increase their ability to plot terror attacks, spread influence, recruit young people, and intimidate the people living under them.

Rashed wrote: “The Houthi militia is very similar to Daesh group. Both of them are terrorist organizations, both in ideology and practice, and their philosophy is based on intimidation and total submission to the leadership.”