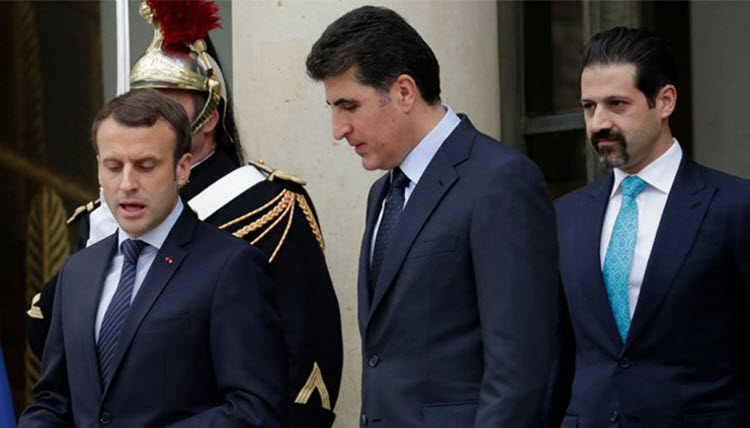 London, 5 Dec – French President Emmanuel Macron called on Iraq to dismantle all militias — including an Iran-backed military force – and open a dialogue with Iraqi Kurdish leaders to ease tensions in a recent press conference.

On December 2, at a joint press conference with Iraqi Kurdish leaders, including Prime Minister Nechirvan Barzani, Macron said: “France calls for a constructive national dialogue to engage in Iraq.”

He continued: “It is essential that there is a gradual demilitarization, in particular of the [Iran-backed Popular Mobilization Forces] that established itself in the last few years in Iraq, and that all militias be gradually dismantled.”

The leaders of the Kurdistan Regional Government (KRG) have accused the mainly Shi’ite and Iran-backed Popular Mobilization Forces (PMF) of violence against the Kurdish people in Iraq’s ethnically mixed regions.

This does not include the September 25 invasion, by Iraqi forces and the PMU, of the autonomous region in northern Iraq which forced the Kurds out of the areas and allowed Iraq to gain control of a major oil field that they passed on to Iran.

They invaded after the Iraqi Kurds held an independence referendum, which Iraqi leaders called illegal.

The Iraqi government has denied that the PMF, which it supports, has been engaged in violence against the Kurds.

Prime Minister Haider al-Abadi’s office issued a statement on December 2, which said that Abadi had spoken to Macron, who had confirmed France’s commitment to a unified Iraq but did not raise the subject of dismantling the militias.

He said: “These positions from France are absolutely rejected and harm Iraq’s sovereignty and its institutions.”

However Iraq reacts to Macron’s call, this is far from the first time that France has countered the Iranian Regime on its interference in the Middle East and its ballistic missile programme since Macron took office.

In early November, Macron announced that he would be standing strong in opposition to Iran’s ballistic missile program and its malign influence in the Middle East.

Meanwhile, the French Foreign Ministry noted that France was taking seriously the USA’s concerns over Iran’s violations of two UN Security Council resolutions and urged the Iranian Regime to comply with all its international commitments.

Alexandre Georgini, deputy foreign ministry spokesperson, said: “We take these American indications seriously and attach utmost importance to Iran’s compliance with all of its international obligations, including the weapons’ transfer bans provided for in UN Security Council Resolutions 2216 and 2231.”

It is clear that Macron does not trust the Iranian Regime, nor should he.