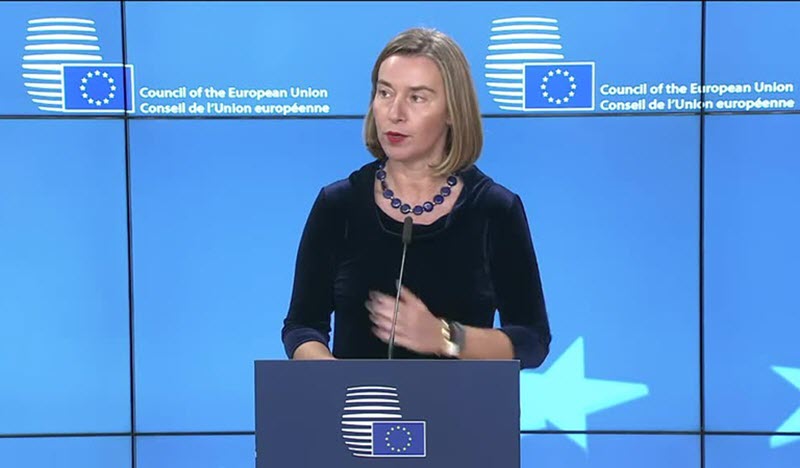 London, 23 Jan – The EU’s High Representative for Foreign Affairs Federica Mogherini, said, regarding the recent Iran protests, “we expect all concerned to refrain from violence.” This, after at least 22 people were killed.

Josh Block, president and CEO of The Israel Project wrote in an op-ed for The Times of Israel that lacking a strong response from Europe, America’s leadership is all the “more critical.” He noted that in the United States, “everyone from President Donald Trump and Marco Rubio to Bernie Sanders and Bob Menendez,” voiced their support for Iranians.

People in Iran spoke out against the regime’s financial mismanagement that has led to widespread poverty. Chants of “We don’t want the Islamic Republic,” and “Leave Syria, leave Gaza, leave Lebanon,” show that the people do not support their government’s foreign adventures.

The British, German, French and Swiss governments also made what were believed to be neutral statements. Iranian Foreign Minister Mohammad Javad Zarif was welcomed in Brussels to discuss the 2015 nuclear deal two weeks ago. He was treated as an honored equal there.

Block also wrote, “Europe’s unwillingness to clip Iran’s wings of terror and oppression makes America’s leadership more critical,” and added, “Not for the first time has Washington been at odds with European governments since Trump was elected president. Whether the historical announcement to recognize Jerusalem as the capital of Israel, or courageous efforts to confront blatant anti-Semitism at the United Nations, America has sometimes stood proudest when it has stood alone.”

Block called the designation of Iran’s Islamic Revolutionary Guard Corps (IRGC) as a terrorist organization by the US, and its tough stance on the nuclear deal, a strong American response to Iran’s continued repression. The U.S. should follow through by sanctioning those institutions that enable the regime’s ongoing repression of its people including the Central Bank of Iran and EIKO, a foundation controlled by Supreme Leader Ayatollah Ali Khamenei, according to Block.

Europe’s response may be driven by the European desire for Iranian business, and sanctions on those institutions will make doing business with Iran even more risky. Europe’s businesses won’t want to pursue opportunities in Iran’s $400 billion economy if it means being shunned the U.S.’s $19 trillion economy.

Reuters: A Russian Soyuz spacecraft blasted off on Monday...