Us Fights for Un Sanctions Against Iran 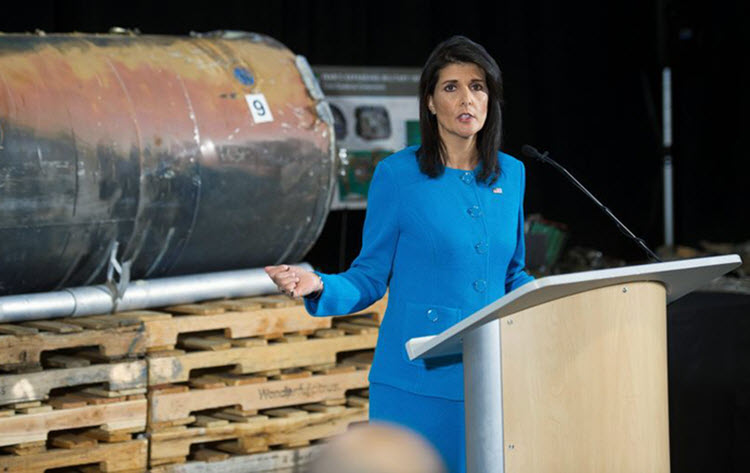 London, 29 Jan – The US is seeking to bolster its case for United Nations action against Iran when envoys from the UN Security Council visit the US today to view pieces of weapons that Ambassador Nikki Haley says were given to the Houthis in Yemen by the Iranian Regime.

The Donald Trump administration spent most of 2017, lobbying for the Iranian Regime to be held to account at the UN and threatening to pull out of the 2015 nuclear deal if “disastrous flaws” are not fixed.

The UN ambassadors will visit a military hangar at Joint Base Anacostia-Bolling near Washington where last month Hayley presented remnants of the ballistic missile fired on Saudi Arabia by Yemen on November 4, which the Pentagon said is Iranian-made, among other weapons.

The Iranian Regime has denied the accusation, but experts have reported to the Security Council that Iran violated UN sanctions on Yemen because “it failed to take the necessary measures to prevent the direct or indirect supply, sale or transfer” of short-range ballistic missiles and other equipment to the Iran-allied Houthi group.

The independent experts said: “[We have] identified missile remnants, related military equipment and military unmanned aerial vehicles that are of Iranian origin and were introduced into Yemen after the imposition of the targeted arms embargo.”

This actually violates two UN resolutions; one on arming the Houthis and another on Iran’s development of ballistic missiles designed to deliver nuclear weapons (until 2024).

While most sanctions on Iran were lifted after the signing of the 2015 nuclear deal, the UN resolution that enshrines the deal subjects the Iranian Regime to a UN arms embargo among other restrictions not covered in the nuclear deal.

Last month, Haley said she was exploring several options for the UN to pressure Iran to adjust its behaviour. However, it is likely that she will face opposition from China and Russia when arguing that UN action is needed.

In order to pass a new resolution banning Iran from all activities related to ballistic missiles, the resolution needs nine votes in favour and no vetoes by the US, Britain, France, China or Russia.

The US can also propose the blacklisting of people or entities by the council’s Yemen sanctions committee, but this is described as “a closed-door move” and would require consensus approval by the 15-members.

Diplomats, who spoke on the condition of anonymity, said Haley has not yet signalled which accountability option she might pursue or when.

Tensions Increase Between Political Factions in Iran, as FATF Week in Paris Begins

Empowering the democratic opposition in Iran

The Hill - By Dick Armey: During the Cold...