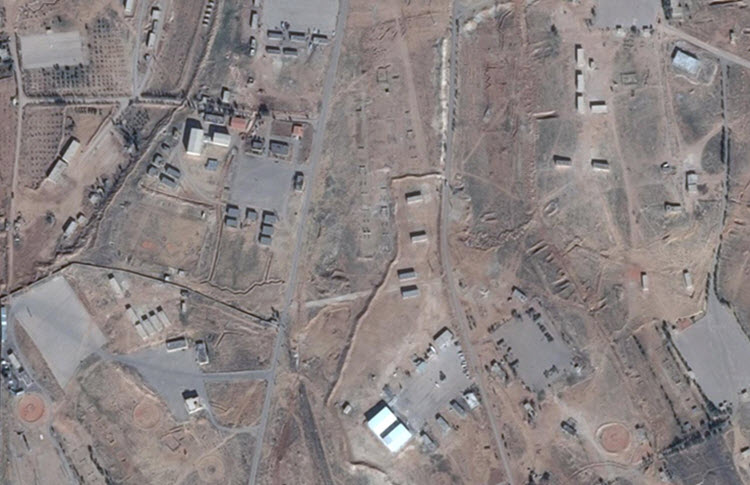 London, 01 Mar – Reports indicate that Iran has built and set up a military base just outside the Syrian capital. It is being used to store its missiles that are reportedly able to strike Israel.

The base, with brand new hangars, is located eight miles from Damascus. ImageSat International has satellite images showing the structure.

Intelligence experts have said that the base is being operated by the special operations branch of the Islamic Revolutionary Guard Corps (IRGC) – the Quds Force. There are apparently a couple of hangars that contain short-range and medium-range missiles.

Last year, a similar base just south of the city was destroyed after being hit by Israeli surface-to-surface missiles.

Israel’s UN ambassador recently warned that Iran was setting up military bases in Syria. He said last week that Iran is currently in command of around 82,000 fighters in Syria. He explained that 60,000 are Syrians, 9,000 are from Hezbollah, 3,000 are from the IRGC, and 10,000 are from various different militias from Afghanistan, Iraq, Pakistan, and other countries in the Middle East.

The ambassador also warned that hundreds of millions of dollars are being spent by Iran on land and factories in the country.

Tensions between Iran and Israel have been escalating for the past few months. An Iranian drone flew into Israeli airspace, but it was shot down by Israeli jets. Then an Israeli jet was shot down in retaliation – the first downed Israeli jet since the eighties. Israel proceeded to strike Iranian bases in Syria. Before the situation escalated any further, Russian President Vladimir Putin intervened.

The Iranian regime has been meddling abroad for many years. As well as to export terrorism, the main reason behind its meddling is to divert attention away from the domestic crisis that is plaguing the country.

At the end of December, the people of Iran took to the streets to protest against the dire economic situation and the poor social conditions. The public discontent was so evident and people were even calling for death to the Supreme Leader and death to Rouhani.

As it always does when faced with domestic repression, the Iranian regime brutally cracked down on the people. Thousands of protesters were arrested and thrown in jail and there were a number of deaths. The authorities attributed the deaths to suicide, but it is clear that this is completely untrue.

The human rights situation in Iran is worsening and there is no freedom or respect from the government towards its people. The situation has reached a point where the only solution is regime change.

Iran has been given numerous chances to reform, but it has always taken the route of terrorism and suppression. It had ample opportunity to integrate itself into the international community when the nuclear agreement was put in place, but it made dangerous choices to act against reason.

Even after the “golden years” of appeasement during the Obama administration’s time in office Iran chose to isolate itself. Regime change will be the safest bet for the people of Iran and the international community.

Powers have “way to go” on Iran resolution: Rice