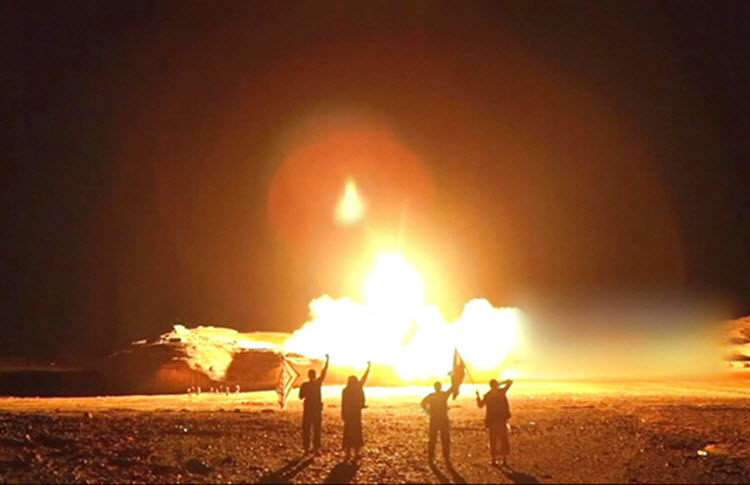 London, 10 May – The Iran-backed Houthis fired several ballistic missiles at Riyadh, Saudi Arabia, on Wednesday, but, luckily, these were intercepted by the kingdom’s missile defence systems and there were no immediate reports of casualties or damage.

This attack came only one day after the US – Saudi Arabia’s top Western ally – withdrew from the 2015 Iranian nuclear deal, which could mean that Iran may well target US allies and interests in the Middle East in retaliation.

The Iran-backed Houthis, who control the majority of Yemen since their takeover in 2014, reported that the missiles were aimed at economic targets in Riyadh. They have fired a series of ballistic missiles, at least some of which are proven by the UN to be Iranian-made, at Saudi Arabia in the past year.

Colonel Aziz Rashed, the spokesman for the Houthis, said that this attack was part of “a new phase” of strikes and threatened that more were to come.

Saudi Arabia is not only one of Iran’s major foes in the Middle East, but they are also leading the US-backed Arab alliance to reinstate the internationally-recognised Yemeni government, led by President Abd Rabbu Mansour al-Hadi, who lives in exile in Riyadh. Thus, making them a key target for any Iranian proxy force, but especially the Houthis.

In a statement, Colonel Turki al-Malki, spokesman for the Saudi-led coalition, said that Saudi air defences had intercepted one missile, with another falling in an uninhabited desert outside of the capital.

In a separate statement, he said that the Houthis had “failed to launch a short-range Badr-type rocket” toward Najran, Saudi Arabia, but it fell in an unpopulated desert area.

On Wednesday, Saudi Arabia and its allies, including Yemen’s internationally recognised government, praised Trump for pulling out of the nuclear deal, noting that it was necessary to stop Iran’s “destabilizing and dangerous” behaviour.

In a statement, Saudi Arabia said: “The Iranian regime has exploited the benefits of the nuclear agreement to export violence and terrorism to its neighbours.”

Later on, Saudi state media confirmed that their air defence forces had intercepted another missile launched at Jizan, in southern Saudi Arabia, an attack that the Houthis have also claimed responsibility for.

Saudi-led coalition spokesman Malki said: “This hostile action by the Houthi militia backed by Iran proves the continued involvement of the Iranian regime.”

The Saudi Civil Defence will test a warning siren in Riyadh and other provinces on Thursday. The alert will tell citizens to take shelter in secure locations and avoid “areas prone to air strikes and missile strikes”.

Reuters: Iran's ambassador to Russia said on Thursday that...