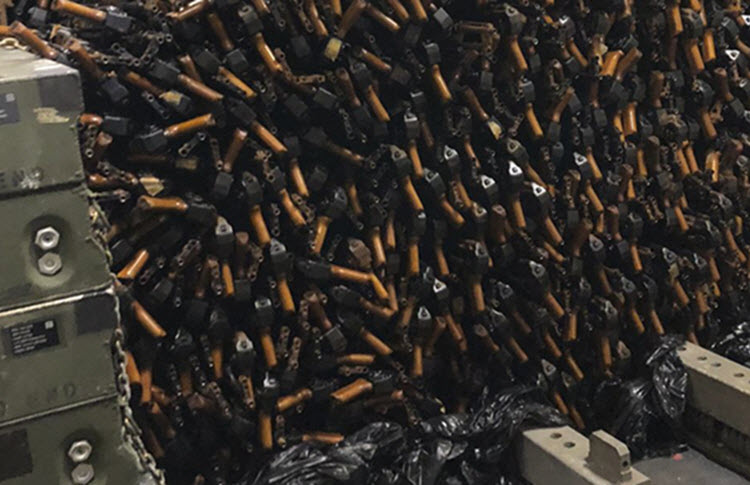 London, 28 Oct – More than 2,500 AK-47 rifles and other guns that were seized by the crew of a U.S. destroyer off the coast of Yemen are being examined by UN inspectors to determine whether the weapons originated in Iran or Somalia.

The UN inspectors were invited on board by US authorities on October 25th. They are there to determine whether or not the weapons provide proof that Iran is smuggling arms to allied Shi’ite Houthi rebels, which Iran denies. But the United Nations has repeatedly charged Iran with illegally smuggling weapons to the Houthis, in violation of UN resolutions.

U.S. forces patrolling the waters around Yemen have seized few weapons caches like the one seized by the USS Jason Dunham in late August. “It’s one big traffic corridor,” Vice Admiral Scott Stearney, commander of U.S. 5th Fleet, called the Gulf of Aden and other waterways around Yemen, when he spoke to reporters on board the vessel on October 25th. Stearney added that the UN inspectors were experts on illicit weapons from Iran, Yemen, and Somalia.

While on patrol in the region in August, the U.S. destroyer’s crew noticed large bags being transferred from a dhow into a smaller skiff, about 70 miles off the coast of Yemen. The Navy ship intercepted the skiff and determined it was smuggling weapons.

The rifles were bundled in plastic, and hidden in green burlap bags, according to Navy Commander John Hamilton, commander of the Dunham. Reporters were allowed to see the assault rifles, which were heavily rusted after nearly two months at sea. The weapons had been unpacked, and were ready for inspection by the UN team.

Hamilton said the crew on the dhow told them they were carrying flour and wheat, but none of the foodstuffs were found on board.

Navy Captain Adan Cruz, commodore of U.S. Naval Forces Central Command, said the weapons may have been shipped from Somalia, rather than Iran. He said that the UN inspector will determine the guns’ origin and “see first-hand the weapons flowing into the region.”

UN Ambassador Nikki Haley has repeatedly accused Iran of supplying weapons to the Houthis. She displayed the remnants of missiles that the Houthi rebels had fired at Saudi Arabia, last year. The Saudis are backing the Yemeni government in the civil war.

IAEA may turn down Iranian request for help with nuclear reactor: diplomats

AFP: The UN atomic agency is expected this week...