Turkey and Hamas Side With Iran 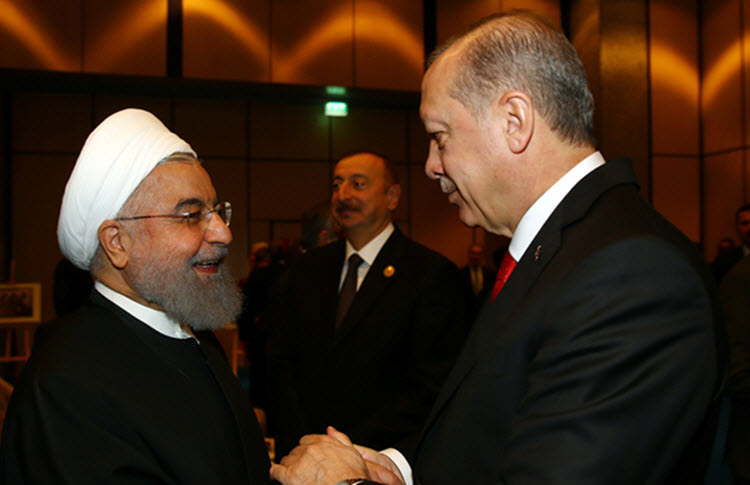 London, 7 Nov – The second round of US economic sanctions against Iran went into effect early this week. Regionally and internationally, it is now clear who defends this dictatorship, whether it is Arabs or foreigners, or left-wing or right-wing groups.

It was expected that the Lebanese Hezbollah, the Yemeni Houthis and the Iraqi Popular Mobilization have spoken out against these sanctions, they are part of the Khomeini body.

Those who claim political or sectarian disparities like the Palestinian Hamas Movement, have also spoken out regarding the sanctions targeting Iran. The Hamas Movement issued a statement, “These sanctions aim to weaken the factors of steadfastness.” The Movement stands in “solidarity” with the Iranian government, it “stands by Iran and by all the vivid forces in confronting the Zionist-American arrogance.” Hamas is a “governance” in the Gaza Strip that has been afflicted by Israel’s strikes.

The Turkish president’s stance on the sanctions was a bit surprising. Turkish President Recep Tayyip Erdogan said, “We don’t find the (Iran) sanctions appropriate.” He added, “These are steps aimed at unbalancing the world. We don’t want to live in an imperialist world.”

Apparently, the dispute on the Syrian arena between Ankara and Tehran was a “temporary” dispute, and in the essence, Iran and Turkey with their affiliates, such as Hamas, Hezbollah, or the Houthis, are in the “political Islam” camp.

There are mutual principles and a mutual support between the Brotherhood group and the Khomeini group. Ali Khamenei, Iran’s current Supreme Leader, admired the thought of Sayyid Qutb, the famous Brotherhood preacher of extremism, and that he translated some of his books to Farsi.

Ahmad Amirabadi, an Iranian MP for the city of Qom, said on Twitter, “All people and institutions who were active in going around the previous sanctions are included in the current sanctions.” He also asked, “Who delivered this information to the enemy?”

Iran and Turkey are major trade partners. Turkey and Iran have heavy mutual influence on each other, due to geographical proximity, linguistic and ethnic relations, many common cultural aspects, and shared empires. Turkey has an embassy in Tehran, and consulates in Tabriz and Urmia. Iran has its embassy in Ankara, and consulates in Istanbul, Erzurum, and Trabzon.

In fact, after the Iran nuclear agreement was implemented, Erdogan turned the question back on the international community. “In fact, there is no nuclear weapon in Iran now, but Israel, which is also located in our region, possesses nuclear arms. Turkey is the same distance from both of them. What has the international community said against Israel so far? Is this the superiority of law or the law of superiors?”

AFP: James Jeffrey, the new US ambassador to Iraq,...

Sunday Times - Leaders: Even with the finest speechwriters,...