Iran Threatens US in Wake of IRGC Designation 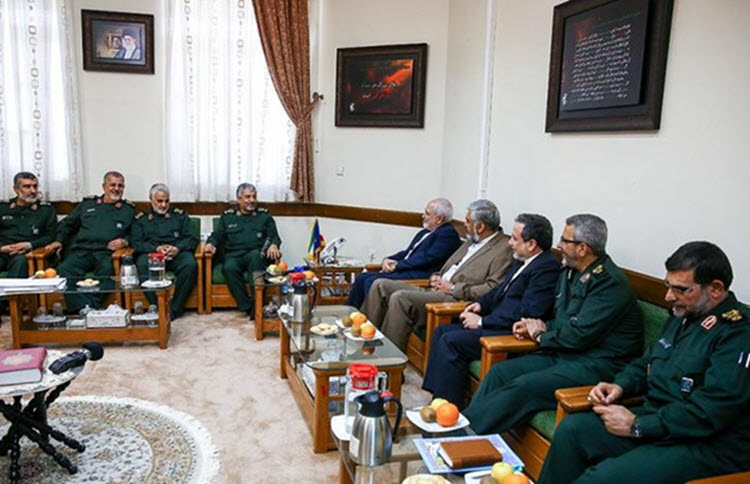 Iranian Foreign Minister Mohammad Javad Zarif and his deputies have visited the commanders of the Islamic Revolution Guards Corps (IRGC) in the wake of the US designation of the group as a Foreign Terrorist Organization (FTO).

During the meeting with Gen. Mohammad Ali Jafari the top commander of IRGC, Gen Qassem Soleimani the commander of the extraterritorial Qods force and others, Zarif predictably described the US decision as “stupid”, claimed it had created “unity and sympathy in the country”, and called it a sign of “desperate” US policies in the region.

Jafari called the designation “very ridiculous” and said that US troops in the Middle East were at the mercy of the IRGC, claiming they couldn’t and “wouldn’t dare” take any military action against Iran.

There are currently 5,200 US troops in Iraq and 2,000 in Syria, in addition to the US 5th fleet based in Bahrain and a base in Qatar, so the US is taking this threat seriously. While Iran does have a variety of missiles deployed in the Persian Gulf, the US Navy and air power in the Middle East carry serious firepower in case of any military confrontation by Iran.

Meanwhile, Iranian President Hassan Rouhani threatened the US as he unveiled more advanced IR6 centrifuges at a ceremony for the 13th National Day of Nuclear Technology in Iran and claimed that if America “continue[d] to walk down this road” then Iran would just create IR8 centrifuges soon.

He said: “If you want to limit Iran’s military power, you know that we have developed missiles since last year that you wouldn’t even imagine.”

This refers to the US withdrawal from the Joint Comprehensive Plan of Action (JCPOA) in May 2018 and subsequent reimposement of sanctions. The West had raised concerns numerous times over the continuation of Iran’s nuclear programme, including the installation of more advanced centrifuges, which could lead to the development of nuclear weapons and threats against Western allies in the Middle East.

The sanctions have so far increased the economic crisis that Iran is battling.

The US designated the IRGC on Monday, saying that the group is a vehicle for Iran’s clerical rulers to support terrorist groups in the Mideast and around the world, as well as increase domestic repression on the Iranian people.

In related news, US Secretary of State Mike Pompeo said on April 9 that Soleimani “is a terrorist” responsible for the deaths of hundreds of American troops in Iraq.

Reuters: Students, once the backbone of Iran's reformist movement,...