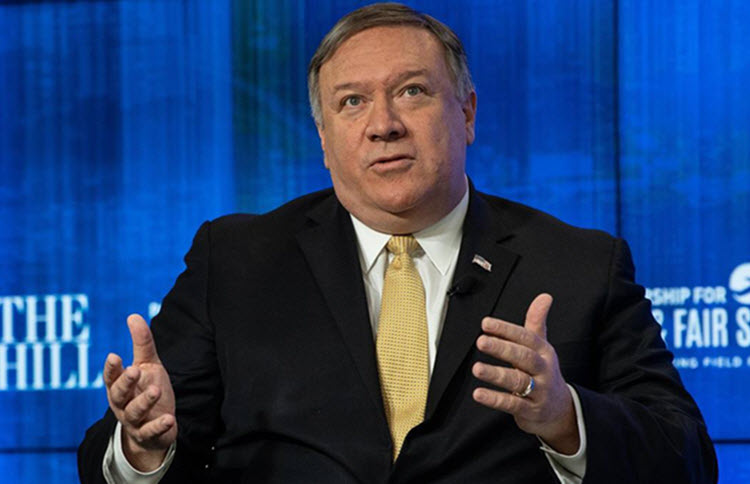 US Secretary of State Mike Pompeo accused Iran on Monday of ordering the Houthi rebels in Yemen to continue fighting despite commitments they made in Stockholm last December.

Pompeo, speaking at an event in Washington hosted by The Hill newspaper, said: “[The Houthis] continue to refuse to comply with the agreements that they signed up for in Stockholm, Sweden, they refuse to withdraw from the port of Hodeidah … this is because Iran has chosen to direct them to do that.”

Pompeo said that Iran’s influence could also be seen in the“missile system, the hardware, the military capability” that the Houthis had acquired from Iran.

He said: “These are not Houthi indigenous weapons systems. They have been smuggled into Yemen from Iran.”

Pompeo then went on to defend the US’s role in Yemen, advising that they were fighting Al Qaeda in the Arabian Peninsula and supporting Saudi Arabia to counter the missile threat from the Houthis.

He said: “The Saudis have had missiles fly that could have hit you [US citizens] at King Khalid airport. The support we are providing to the Saudis is in America’s best interest.”

Speaking about the recent Congress resolution to end America’s role in Yemen, Pompeo said that the people most pleased by this were Qassem Suleimani, head of Iran’s terrorist Revolutionary Guard Corps, and supreme leader Ayatollah Ali Khamenei. Thankfully, Donald Trump vetoed this resolution.

Pompeo then defended the decision to end sanctions waivers on Iranian oil, given to Iran’s eight biggest importers in November.

He said: “We are convinced we can make sure the markets are adequately supplied. Sovereign nations make their own choices; individual businesses do their own choices. What we can do is prepare a sanctions machine that makes it incredibly costly [for those breaching them].”

Pompeo stressed that the Trump administration was seeking internal reform from Iran rather than regime change and reiterated his call for Iran to “behave like a normal country” and adhere to the US’s 12 demands, including ending its support for terrorism.

Pompeo said: “We are hoping that the regime makes a set of decisions that are very different from the ones that they are making today… Simple things such as don’t kill people in Europe, you shouldn’t support Shia militias in Iraq trying to destabilise the Iraqi government, and not to continue to sow strife in Lebanon by underwriting Hezbollah. If Iran and its leaders can find a way to do that, we are happy to engage them and bring them to the community of nations.”

Reuters: Iran avoided the most difficult questions at a...

AP: A news agency in Iran is reporting that...