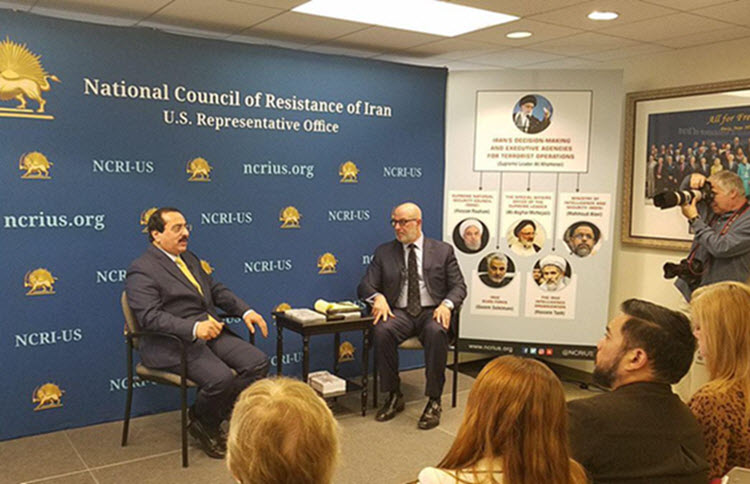 The leading Iranian opposition group said Wednesday that the Trump administration should add Iran’s intelligence ministry (MOIS) to its list of foreign terrorist groups in order to hold Iran responsible for its terrorist acts that span the past four decades.

MOIS agents operate closely with the Quds Force, an arm of the Iranian Revolutionary Guard Corps, both of which are already on the US’s terror watch list. The MOIS is “heavily involved with terrorism”, according to Alireza Jafarzadeh, deputy director for the National Council of Resistance of Iran, most notably working with the Iran-backed Hezbollah, the Houthis, and Hamas in direct operations against Iran’s enemies.

This includes 10 separate terror plots against targets in the US, UK, Germany, the Netherlands, Turkey, Albania, Denmark and France, which Jafarzadeh said were planned because Iran knows it is fighting a losing battle against freedom.

At an event unveiling the NCRI’s latest assessment of Iranian intelligence activities in Europe and the West, Jafarzadeh said: “If [the U.S.] wants to fight terrorism, [they will have to] designate the MOIS [as a terror organization].”

He said that the MOIS merits the same treatment as the IRGC, calling them “two faces of the same coin”, with the MOIS starting life as a subset of the IRGC.

Former US Ambassador to Bahrain Adam Ereli, who was moderating the event, said: “This is not theoretical mumbo-jumbo, this is about life and death.”

This call from the NCRI, a Paris-based umbrella organization for Iranian exile groups that have long urged the overthrow of the ruling mullahs, came one day after the US formally ended sanctions waivers on Iranian oil, which had allowed eight countries to continue their purchases for six months from November 2018.

Secretary of State Mike Pompeo said on Monday: “We will no longer grant any exemptions. We’re going to zero across the board. Our goal has been to get countries to cease importing Iranian oil altogether.”

However, some of the big buyers, including China and Turkey, have indicated that they will not comply, but this could be just bluster.

These sanctions and others came into force after the US withdrew from the 2015 international nuclear deal with Iran last May, calling it the “worst deal ever”. His plan is to eliminate the Regime’s funding, stop them from supporting terrorist groups, and bring Iran back to the negotiating table for a deal that addresses all of the Regime’s malign behaviour.

Reuters: Iran remain without a head coach after the...