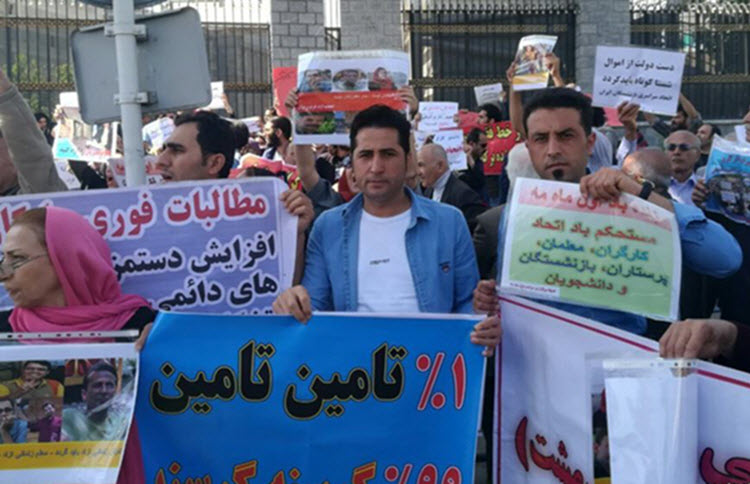 Iranian police have arrested at least 35 people for taking part in a Labor Day demonstration in front of the Iranian Parliament on Wednesday, while violently dispersing the rest of the protesters.

The demonstrators, mainly members of Tehran Bus Drivers’ Union, were beaten, wounded, and dragged on the ground before being arrested.

Eyewitnesses said that the male detainees were taken to the security police headquarters in Gisha, in western Tehran.

The thousands of protesters at the May Day rally can be seen in videos chanting against high prices and rising inflation, while also voicing concerns about low pay and poor working conditions. They often carried banners and posters to show their affiliation with different labour unions.

The Tehran bus drivers’ union announced via Telegram that several workers and union members were arrested.

Activist Mohammad Javad Akbarein exposed the hypocrisy of President Hassan Rouhani who claimed on Tuesday that “workers were in the frontline of the struggle against the United States”, only to arrest them on Wednesday.

While Amnesty International released a statement accusing Iran of showing “utter contempt” for workers’ rights and calling on the authorities to release anyone detained solely for peacefully exercising their rights to freedom of expression, association and assembly.

Other reports say that journalists Kayvan Samimi and Marzieh Amiri were also arrested.

Iran doesn’t recognize labour unions established by workers – instead, allowing people to join the government-run union that supports the dictators over the workers – and often cracks down violently on their protests. They defend the crackdown by saying that the workers broke the law by joining the union.

One Tehran provincial official, Reza Alikhani, tried to claim that the protesters didn’t have the right permits, but failed to advise that hundreds of pro-regime demonstrators (likely paid off by the Mullahs) protested the Financial Action Task Force (FATF) bills in February without a permit.

Alireza Mahjoub, a leader of the state-run Workers’ House organization in Tehran, said that labour activists had applied for permits for five years but had always been rejected.

He said: “Everyone in this country has a right to march, and workers have a right, too. We are here for this purpose.”

Maryam Rajavi, the president-elect of the resistance, said: “In spite of pressures and anti-worker policies of the mullahs’ regime, workers and toilers of Iran will neither rest nor surrender; they have shown as much with their protests and uprisings over the past year. They can rely on the ongoing support and solidarity of women, youth, students and all the disenchanted sectors of Iranian society.”

IRGC is cause of instability in the Middle East