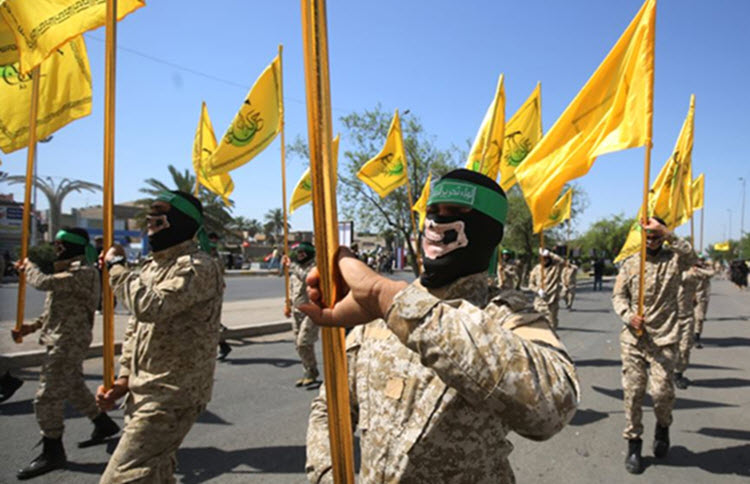 Iran’s state TV channels are airing a music video that glorifies an anti-American Iraqi Shiite paramilitary group in an attempt to sway public opinion in Iran in favour of the mullahs’ involvement in Middle East conflicts.

The video, which is entitled “The Noble Ones” and praises Harakat Hezbollah al-Nujaba, a group designated as a terrorist organization by the US in March, has been shown several times already.

The five-minute video, featuring Persian and Arabic lyrics, depicts a fighter from the group dying in battle, with his young son vowing to fight on his dad’s behalf. As the song closes, the lyrics say that Harakat Hezbollah al-Nujaba’s next target will be Israel. (They have already launched the Golan Liberation Brigade, which aims to remove Israel from the Golan Heights.)

Fereshteh Sadeghi, a Tehran-based political analyst, said that the video was released on Quds Day, an annual march held on the last Friday of Ramadan, which is initiated by Iran. On that day, Iran’s supporters show hatred for Israel and the US by burning flags and chanting slogans like “Jerusalem is the capital of Palestine,” “Death to America” and “Death to Israel”.

Sadeghi said: “This move was to show that Iran will pursue its ideological goals and use the help of its allies pragmatically, helping them as long as they stay loyal to those ideological goals while warning its adversaries that they will receive the more immense damage if they decide to try Iran.”

The 10,000-fighter group established in 2013, known also as the Movement of the Noble Ones, is primarily known for its anti-American and pro-Iranian rhetoric. While mainly active in Iraq, the group has also sent hundreds of members to fight in the Syrian Civil War on behalf of Iran, who have a vested interest in making sure that the Bashar Assad dictatorship survives.

Meir Javedanfar, a lecturer of Iranian politics at the Interdisciplinary Center at Herzliya, Israel, said that the lyrics of the song show that Iran has plans to stay in Syria long after the defeat of Islamic State.

Analysts have said that the emotional footage of war and victory in the music video is designed to encourage the Iranian populace to support Iran’s involvement in Middle East conflicts. They also report that Iranian TV channels have increased their nationalistic rhetoric since 2018 when the US withdrew from the Iran nuclear deal.

Rasool Nafisi, an Iran analyst with Strayer University in Virginia, said: “Iran wants to send a message to its rival regional contenders that it could pursue its global and regional goals through its proxies… There is no doubt that Tehran has clearly increased using proxies as a leverage against its adversaries and blatantly pointed to them as a winning card in the regional equations.”

10 years after US invasion, Kurds look to the West

AP: At an elite private school in Iraq's autonomous...