Iran Remains the World’s Worst State Sponsor of Terrorism – US 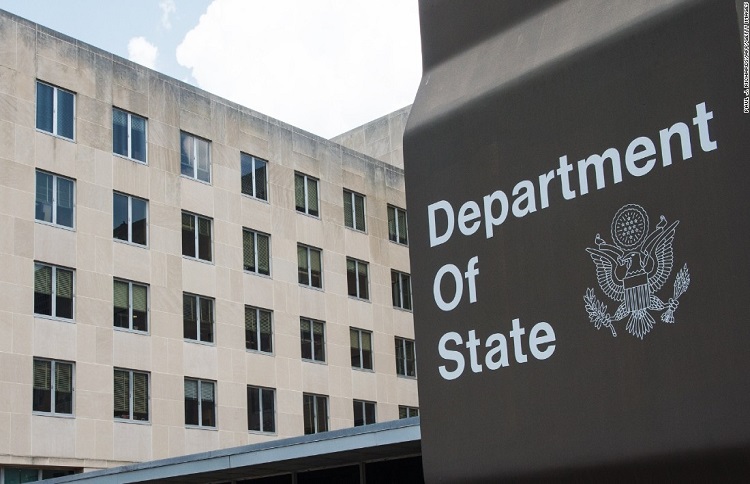 In its annual Country Reports on Terrorism 2018, the United States State Department on Friday described Iran as the “world’s worst state sponsor of terrorism”.

“The regime has spent nearly one billion dollars per year to support terrorist groups that serve as its proxies and expand its malign influence across the globe”, the report said.

The report outlined Iranian support for groups including Hezbollah in Lebanon, Hamas in Gaza, Kataib Hezbollah in Iraq, the Houthis in Yemen, the Palestinian Islamist groups Hamas and Islamic Jihad.

Counterterrorism Coordinator Ambassador Nathan Sales warned that the Iranian threat is not confined to the Middle East. “In 2018, that threat reached Europe in a big way.  In January, Germany investigated 10 suspected IRGC Quds Force operatives. In the summer, authorities in Belgium, France, and Germany thwarted an Iranian plot to bomb a political rally near Paris. In October, an Iranian operative was arrested for planning an assassination in Denmark. And in December, Albania expelled two Iranian officials for plotting terrorist attacks there,” he said.

The State Department also accused Iran of harboring al Qaeda (AQ) operatives. “Iran has allowed AQ facilitators to operate a core facilitation pipeline through Iran since at least 2009, enabling AQ to move funds and fighters to South Asia and Syria,” according to the report.

The following is an excerpt from the report:

Designated as a State Sponsor of Terrorism in 1984, Iran continued its terrorist-related activity in 2018, including support for Hizballah, Palestinian terrorist groups in Gaza, and various groups in Syria, Iraq, and throughout the Middle East.  Iran used the Islamic Revolutionary Guard Corps-Qods Force (IRGC-QF) to provide support to terrorist organizations, provide cover for associated covert operations, and create instability in the region.  Iran has acknowledged the involvement of the IRGC-QF in the Iraq and Syria conflicts, and the IRGC-QF is Iran’s primary mechanism for cultivating and supporting terrorists abroad.  Iran also uses regional proxy forces to provide sufficient deniability to try to shield it from the consequences of its aggressive policies.

In 2018, Iran supported various Iraqi Shia terrorist groups, including Kata’ib Hizballah.  It also bolstered the Assad regime in Syria, and Shia terrorist groups operating there, including Hizballah.  Iran views the Assad regime in Syria as a crucial ally and Syria and Iraq as vital routes to supply weapons to Hizballah, Iran’s primary terrorist proxy group.  Through financial or residency enticements, Iran has facilitated and coerced primarily Shia fighters from Afghanistan and Pakistan to participate in the Assad regime’s brutal crackdown in Syria.  Iran-supported Shia militias in Iraq have also committed serious human rights abuses against primarily Sunni civilians.  Iranian forces have directly backed militia operations in Syria with armored vehicles, artillery, and drones.

Since the end of the 2006 Israeli-Hizballah conflict, Iran has supplied Hizballah with thousands of rockets, missiles, and small arms in direct violation of UNSCR 1701. Israeli security officials and politicians expressed concerns that Iran was supplying Hizballah with advanced weapons systems and technologies, as well as assisting the group in creating an infrastructure that would permit it to indigenously produce rockets and missiles to threaten Israel from Lebanon and Syria.  Iran has provided hundreds of millions of dollars in support of Hizballah and trained thousands of its fighters at camps in Iran.  Hizballah fighters have been used extensively in Syria to support the Assad regime.  In Bahrain, Iran has continued to provide weapons, support, and training to local Shia militant groups.

In 2018, Iran provided support to Hamas and other designated Palestinian terrorist groups, including Palestine Islamic Jihad and the Popular Front for the Liberation of Palestine-General Command.  These Palestinian terrorist groups were behind numerous deadly attacks originating in Gaza and the West Bank, including attacks against Israeli civilians in the Sinai Peninsula.

The Iranian government maintains a robust offensive cyber program and has sponsored cyberattacks against a foreign government and private sector entities.

Iran remained unwilling to bring to justice senior al-Qa’ida (AQ) members residing in the country and has refused to publicly identify members in its custody.  Iran has allowed AQ facilitators to operate a core facilitation pipeline through Iran since at least 2009, enabling AQ to move funds and fighters to South Asia and Syria.

On June 30, French and Belgian authorities arrested several individuals – including an Iranian official based in Austria – suspected of planning to attack an event organized by the Mujahedin-e-Khalq in Villepinte. In October, France imposed sanctions on two Iranian operatives and the internal directorate of the Iranian intelligence agency (MOIS) in connection with the covert terrorist plot. Authorities separately arrested 11 people during an October raid of the Iranian government-funded organization Zahra France, which the government suspected of supporting and defending the terrorist organizations Hamas and Hizballah.

Reuters: President Hassan Rouhani is still deciding who will...