AFP: France has urged the European Union to threaten new sanctions against the Iranian regime in the case of a woman sentenced to be stoned to death, in a foreign ministry letter seen by AFP on Friday. 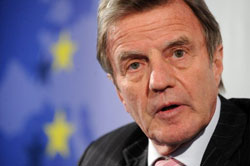 PARIS (AFP) — France has urged the European Union to threaten new sanctions against the Iranian regime in the case of a woman sentenced to be stoned to death, in a foreign ministry letter seen by AFP on Friday.

“A joint letter from all EU member states to the Iranian authorities has become necessary, in my view, if we want to save this young woman,” Kouchner wrote, in a copy of Wednesday’s letter released to AFP.

“We must engage the Union in new initiatives to remind Iranian authorities that, just as in the nuclear matter, their isolationist and closed stance will have a cost for them,” he wrote.

Kouchner said that Iran should only escape these new measures if it “chooses a more responsible course that lives up to its international human rights commitments.”

“I would like the European council to re-start its work on these matters to take new measures against all those in Iran who have organised repression,” he said, referring to an EU foreign ministers’ meeting due on September 10.

Mohammadi-Ashtiani, a mother of two, was sentenced to death by stoning in 2006 by an Iranian Islamic court. Iranian officials claim she is guilty of adultery and was an accomplice in the murder of her husband.

Her execution has been put on hold, amid a mounting international outcry over the sentence, but Iranian officials have insisted that justice will run its course.

Bloomberg: Iran’s Central Bank, which had fixed the national...

AFP: Canada hit straight back on Sunday after Iran...