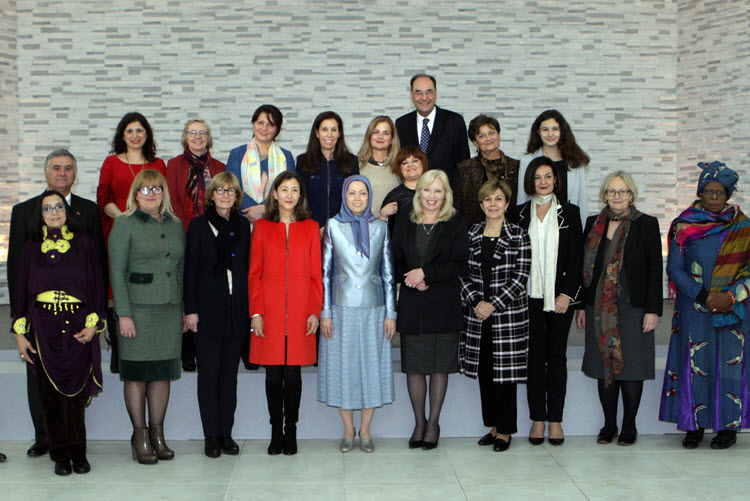 London, 8 Mar – In commemoration of the International Women’s Day, Maryam Rajavi, leader of the Iranian Resistance made a speech about the role of women in dismantling the oppressive Iranian Regime.

She praised those women in Iran who are imprisoned for speaking their minds or promoting social change and assured them, that all members of the Iranian Resistance stand proudly by them.

She blasted the Iranian Regime for their misogynistic laws and practices with normalising the treatment of women as second-class citizens.

She said: “The Iranian regime, in conjunction with its export of terrorism and fundamentalism to the region, is also the prime advocate of misogyny in those countries. Therefore, it should be considered as the most dangerous threat to women’s achievements in today’s world.”

Iranian women are routinely attacked by the ‘morality police’ for being improperly veiled or riding motorbikes, they are discriminated against in terms of education and employment, and female political prisoners are routinely raped in prison.

She continued: “[The fact] that women bear the brunt of repression in Iran, reveals the regime’s defensive tactic against the existential threat it feels from women.”

She notes that women, who make up half of Iran’s population, can and, indeed, are helping to overthrow the patriarchy in Iran.

She said: “Women have proven their effective and growing role in the struggle against the mullahs’ religious tyranny, for example in the scenes of confrontation with the Revolutionary Guards, in their unprecedented resistance in the regime’s torture chambers and dungeons, through their presence in the first ranks of anti-regime demonstrations, in organizing the teachers and workers’ protests and protests by other social strata, in organizing and leading an international social and political movement against the religious fascism ruling Iran, as well as in their active assumption of responsibilities in the organized movement of the Iranian Resistance.”

Then she struck on a particularly poignant point about oppression being interconnected.

She said: “The point I would like to make is that for decades, women’s struggles and the International Women’s Day have focused on the elimination of inequality and violence against women as their objective. Today, however, women have a mission beyond these goals, of saving humanity from fundamentalism and terrorism.”

This should be not only the goal of Iranian women but the goal of women worldwide; when we free ourselves from one oppressive, we’ve made cracks in another.

Rajavi also addressed the men of political movements, encouraging them to embrace female participation and to fight for the rights of women, as the men of the Iranian Resistance have done.

She said: “How could half of any community break the chains of subjugation and compulsion, while the other half remains in darkness?”

She continued: “I must stress that such equality is not confined to legal and political equality or in equal opportunities. Rather, it requires the enhancement of human solidarity where women take ownership of their own fate and men who believe in the cause of equality develop a productive, creative and active character in themselves.”

She made this speech at a conference about Women in Political Leadership, held in Tirana, Albania, on March 8.

The conference was attended by a group of Iranian dissidents from the now-abandoned camps Ashraf and Liberty in Iraq. They were routinely attacked by Iranian troops despite being neutral in a war zone and having UN protected person status. They fled to safety in Albania last year.

For the full text, visit the National Council of Resistance of Iran.

By Pooya Stone LG and Samsung companies operating in...