London, 19 Feb – Dozens of prominent women including political personalities, lawmakers, jurists, judges, and women’s rights advocates from five continents participated in a conference entitled, “Women Force for Change, Iran Uprising and the Role of Women,” held in Paris on Saturday, February 17, 2018, in the presence of the President of the National Council of Resistance of Iran, Mrs. Maryam Rajavi. A delegation of mothers of martyrs, a delegation of Iranian women’s associations and rights activists, as well as a delegation of youth supporting the Iranian Resistance were among the speakers to the conference.

Excerpts of some of the the remarks made at the IWD conference in Paris is as follows:

Professor Rita Süssmuth, former Speaker of the German Bundestag: “What happened in Iran shows that so many years when a lot of people were tortured and died will not be forgotten. I am very glad that we are here together with Mrs. Rajavi. Now, we can see that women can lead.”

Social and economic change will only come when women are in leadership roles. Let us not have just one Mrs. Rajavi, but millions of them. We need lots of voices. So that we can have a world that is free of oppression and suppression…The free women and men of Iran expect us to stand up with them.”

Linda Chavez, former White House Director of Public Liaison: “You cannot reform a totalitarian regime that controls everything. The people of Iran said enough is enough. We want regime change. Death to Khamenei… There must be something to replace an evil dictator with. In Iran, we have Mrs. Rajavi to replace the dictatorship in Iran and bring freedom to people. It is not the question of the person, but the principles she stands for. Separation of religion and state, independent Judiciary, women’s equal participation in leadership. When half of the population is deprived of freedom, no one enjoys freedom. Mrs. Rajavi’s movement is the force for change.”

Senator Ingrid Betancourt, former presidential candidate in Columbia: “I salute the very brave and courageous women of Iran. I salute Mrs. Rajavi the face of Iranian women… The brave young women of Iran who dare to challenge the Iranian regime, they face prison. They have no right to defense, to visit their families, because they dared to think differently. Women are demanding basic human rights, the abolition of the death penalty and the compulsory veil, they say to nuclear program. Iranian women’s fight is a fight against a criminal regime.” 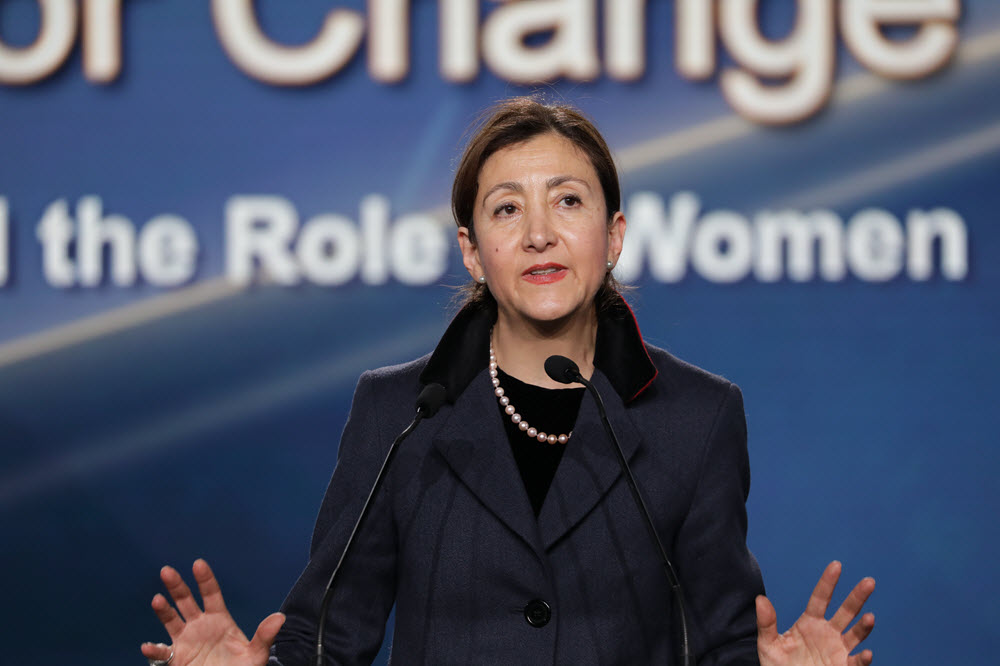 Ms. Rashida Manjoo, former United Nations Special Rapporteur on violence against women: “Arbitrary arrests and detention are widely practiced in Iran with women. Everyone has the right to life, liberty and security of the person. No one shall be subjected to arbitrary detention and confinement. International law prescribes that all detainees must be treated with dignity and respect. Unfortunately, this is not the reality for women imprisoned in Iran. Silence and complicity by international community allows this to continue.”

Aude de Thuin, President of the Women’s Forum for Economy and Society in France: “Iran women have dared to defy power and put their life at risk. For western media, the only right for women is taking off their veil. They do not ask what women want for their countries. Women are the key element of the movement for deep change in their own lives and in their own country. It is time for the world to see and admire the courage of Iranian women. This is why I am here, for freedom of Iranian women, freedom of speech, freedom to live free. We need to encourage and admire the women of Iran. We must reach out and help them.”

Hoda Badran, Chair of Network of Arab Women from Egypt: “Women were always at the forefront of this fight. Today, we see in this new revolt, that women have been extremely courageous. And they are fighting against the police and encourage others not to fear anyone. They call on everyone to be on their side. Women want their freedom and rights. Supporting these women is a duty for freedom loving people.”

Ranjana Kumari Director of Centre for Social Research NGO: We will fight along with Mrs. Rajavi. When we saw the images of these brave women and men in the streets of Iran, we knew that freedom is there. They will not go back… We shall stand with you with your fearless fight until victory. The most important thing is that this is a movement for freedom and against all forms of discrimination. This misogynist and fundamentalist force will be defeated by women.”

Suheir Atassi, member of the Syrian Opposition Coalition and former Vice Chair of the Council:

“During the last 7 years, we have had the exceptional opportunity to discover the women’s energy. They ask for freedom and construction of democracy. They want to take the dictatorship to court… We want the world to help stop this daily torture and killing by the Assad regime… Mrs. Rajavi is a pioneer among Iranian women. She is an icon for you and also for us. She is working to free Iran and also Syria from the clutches of the clerical regime. We also believe in her ten-point plan for future of Syria.”

Rama Yade, former minister of human rights in France: “Never doubt that a small group of conscious, committed individuals can change the world. We are proud more than ever before to support you. The people of Iran have risen up for freedom. They want regime change. We must support them. The protesters are risking their lives. This is a fight for history, for the world. It is all our lives that is determined in the streets of Iran. We are grateful to these courageous people. Thank you Mrs. Rajavi.”

Najima Thay Thay, former Minister of Education and Youth- Morocco: “The cause of Iranian women does not concern only Iranian women but is a global cause. Iranian women led by Mrs. Rajavi are fighting against extremism.”

World powers to hold talks with Iran on April 14: EU

Reuters: World powers will hold the next round of...