A History of Iran-Iraq War: Part 3 Pre-War Provocations and Battles 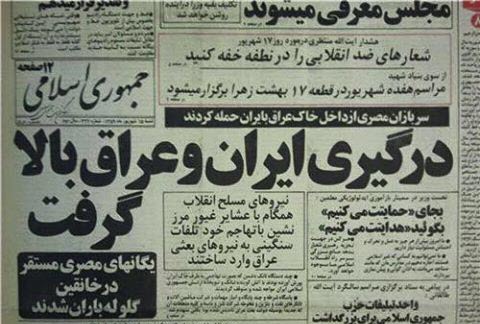 According to the UN reports, the war between Iran and Iraq started on September 22, 1980 when Iraqi aircrafts invaded several airfields in Iran. However, evidence exists in Iranian newspapers during from that period the war had already begun several weeks in advance. In this article we review the substance to these claims.

Sixteen days before the official start of the war (06.09.1980) Keyhan newspaper wrote: “diffused quarrels between Iranian troops and Iraqi troops have turned to a full-scale war between two countries in the border“.

Jomhoori-Eslami newspaper (09.09.1980): “following the command by “Emam”, the revolutionary guards declare that they are ready to occupy Iraq”.

Keyhan newspaper (10.09.1980): “fierce battle between Iranian Phantoms and Iraqi aircrafts at the border.” “According to reports, an organization which is called “Islamic battle of Iraqi Mujahidin” was established in Ghasr-e-Shirin (Iranian city) and their main goal is fighting the Iraqi regime beside the Iranian troops”.

Keyhan newspaper (11.09.1980): “fierce battle between Iranian and Iraqi tanks, armored vehicles and aircrafts at Khan-Leili, Ney-Khazar and Zeynal-Kosh… both sides attack each other”.
Keyhan newspaper (13.09.1980): “Iranian troops in Shalamcheh destroy all Iraqi facilities in the border”.

Etelaat newspaper (16.09.1980): “six outposts, an oil well, 14 tanks and an arsenal destroyed in Iraq” “an Iraqi train which was carrying fuel, exploded by mine”.

Headline in Etelaat newspaper (22.09.1980) a few hours before the airstrikes by Iraq: “joint chiefs of army staff stated that the whole Iraqi coast is under fire by Iranian artillery”.

These are just some examples from Iranian newspapers from. The newspapers and media outlets were full of coverage, interviews and programs about the war in that time.

At the same time, the Iranian regime did its full effort to provoke Iraq, prepare the Iranian people with its propaganda and eventually to trigger this war. A war that destroyed much of the foundation of both countries and took many lives. Now we are faced with some important questions; why reason did the regime have to instigate a war? Why did Khomeini pursue war? What did he achieve by starting this war? We will address these questions in the next article.