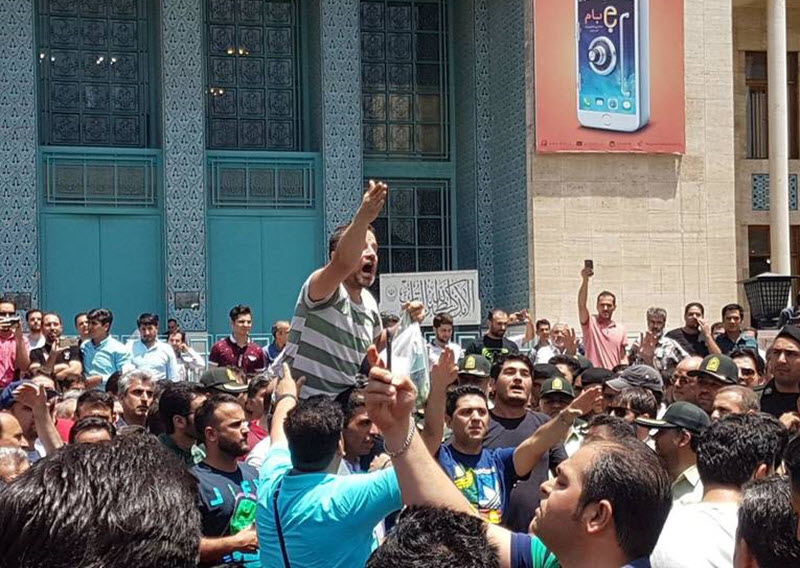 Strikes and demonstrations continued on Wednesday, June 27th, across Tehran despite a massive crackdown by suppressive forces and threats by the regime.

Clashes were reported all over Tehran as marketers and shopkeepers continued their strike for the fourth day.

The MEK network reported a number of demonstrations in other cities as well. Protests and strikes took place in Isfahan, Tabriz, Arak, Kermanshah, and Karaj, as well as in Tehran.

The protests, which began with strikes by merchants in the Grand Bazaar in central Tehran, spread to Tehranpars to the east of Tehran and Shush Street to the south.

On Tuesday, demonstrations went on throughout the day, with protesters facing off against repressive forces. A number of protesters were injured when security forces resorted to gunfire and tear gas in their efforts to suppress the protesters.

On Laleh Zar Street, repressive forces clashed with youth, who resisted. In many places, such as Ferdowsi market, Mellat Street and Ekbatan Street, young people countered tear gas by setting fires. The streets have become scenes of violence as riot police face off against protesting youth.

Meanwhile, the merchant strikes that began the protests continue to spread. The markets of Naser Khosrow, 15 Khordad, and the jewelers market are all participating in the strike. The Ahangaran market in Moazzam al-Dowlah, Abbas Abad market, KIlouis market, the Louti Salh passage shopkeepers, the furniture market in Delawaran Street Complex, the great Iranians complex on Amin al-Mulk Street and Laleh Zar Street shopkeepers are also among the strikers.

The protests and strikes have grown in size to the extent that the regime has had to send in the riot guard, plain clothes officers, and the Revolutionary Guards in addition to the police in an attempt to quell the uprising.

In other cities of Iran, merchants joined the strikes. The Art & Rasteh Bazaar in Isfahan, Arg business complex in Kermanshah, Arak merchants, the indoor market, the gold traders market of Tabriz, and the mobile market in Karaj all went on strike on Tuesday. The MEK network reported that protesters in Azadi Square of Isfahan that “Cannon, tank, firecracker, the mullahs must get lost!”

The protests in Tehran have spread outside of the city and have spread beyond economic issues.

Once again, the people are crying out for regime change. The “Free Iran” rally is on June 30th in Paris, and this is the time for the Iranian opposition to come together to plan for a free and democratic Iran.

Maryam Rajavi, President-elect of the NCRI, of which the MEK is the largest member, will give the keynote address at the rally. There she will discuss her 10-point plan for the future of Iran and the peaceful transition to a democratic Iran, free of the oppressive rule of the mullahs.

In this future Iran, the economic wounds of four decades of corruption and mismanagement can be healed and the human rights abuses that have ripped apart the Iranian people can finally end.

More can be read about the coming rally here. #FreeIran

EU3 initiative with Iran at an end – EU diplomat

Reuters: The Iraqi government may extend a year-end deadline...