Reuters: Germany’s ThyssenKrupp said on Thursday it would freeze new business with Iran with immediate effect in response to ever-harsher sanctions against the Islamic Republic. 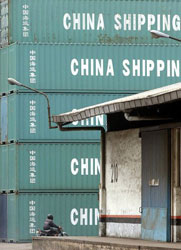 LONDON (Reuters) – Germany’s ThyssenKrupp said on Thursday it would freeze new business with Iran with immediate effect in response to ever-harsher sanctions against the Islamic Republic.

Iran’s day-to-day business is affected by tighter international, U.S. and European Union sanctions imposed in response to Western fears the country’s nuclear activities are aimed at making a bomb. Tehran says it has no such intention.

Following are key facts on some companies that have been moving away from Iran and on others that are still dealing with the country:

MOVING AWAY FROM IRAN

* ThyssenKrupp, Germany’s biggest steelmaker, said on Thursday it would not enter into new contracts with Iran and would terminate existing contracts in support of sanctions policies of Germany, the European Union and the United States.

— BP declined to give a reason for ending the contract, but the halt in supply followed reports Iranian aircraft had been denied fuel because of the latest set of U.S. sanctions.

* Royal Dutch Shell would not renew its contracts to supply Iran Air with jet fuel in response to U.S. pressure to cease business with the Islamic Republic, an industry source said in July.

* Lloyd’s of London said on July 9 it would not insure or reinsure petroleum shipments into Iran.

* Spain’s Repsol said on June 28 it had pulled out of a contract it won with Royal Dutch Shell to develop part of the South Pars gas field in Iran.

* Italy’s Eni told U.S. authorities on April 29 it was handing the operation of Darkhovin oilfield in Iran to local partners to avoid U.S. sanctions.

* Luxury carmaker Daimler announced plans on April 14 to sell its 30 percent stake in an Iranian engine maker and freeze the planned export to Iran of cars and trucks. The announcement followed similar action by German insurers Munich Re and Allianz.

* India’s largest private refiner, Reliance Industries, would not renew a contract to import crude oil from Iran for financial year 2010, two sources familiar with the supply deal said on April 1.

* Ingersoll-Rand Plc, a maker of air compressors and cooling systems for buildings and transport, said it will no longer allow subsidiaries to sell parts or products to Tehran.

* Oilfield services company Smith International said on March 1 it was actively pursuing the termination of all its activities in Iran.

* Caterpillar, the world’s largest manufacturer of construction and mining equipment, said on March 1 it had tightened its policy on not doing business with Iran to prevent foreign subsidiaries from selling equipment to independent dealers who resell it to Tehran.

* German engineering conglomerate Siemens said in January it would not accept further orders from Iran.

* Glencore ceased supplying gasoline to Iran in November 2009, according to traders.

* Accounting giants KPMG, PricewaterhouseCoopers, and Ernst & Young have declared themselves free of any business ties to Iran.

* Russian oil giant LUKOIL resumed gasoline sales to Iran in August together with China’s state-run firm Zhuhai Zhenrong, even as the United States urged the global community to be tough with Tehran. In April it had joined a list of companies that halted shipments as sanctions loomed.

* China is in talks with Iran to use the Chinese yuan to settle transactions of oil and projects.

* Russia has been building Iran’s first nuclear power station near the Gulf port city of Bushehr. Iran began loading fuel into the plant on August 21, a symbol of its growing regional sway and its rejection of international sanctions designed to prevent it building a nuclear bomb.

* The U.S. Government Accountability Office reported in April that 41 foreign companies were involved in Iran’s oil, natural gas and petrochemical sectors from 2005 to 2009. In a report in May, the GAO said seven of those companies received U.S. government contracts worth nearly $880 million.

* Russia’s Gazprom confirmed in March it was in talks with Iran on developing the Azar oil field and has also expressed interest in Iran’s giant South Pars field.

* Pakistan’s Foreign Ministry said on June 10 that a $7.6 billion project for export of Iranian natural gas to Pakistan would be unaffected by the imposition of new U.N. sanctions.