Thousands of Iranians rally against Ahmadinejad in NY 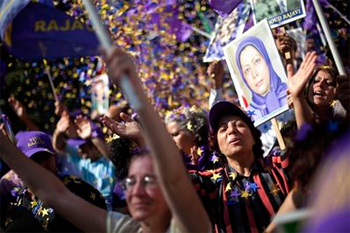 New York, Sep. 23 – Thousands of Iranians on Thursday rallied outside the United Nations headquarters in New York to protest the visit by the Islamic Republic’s hard-line President Mahmoud Ahmadinejad.

Organisers said up to 20,000 people took part in the noisy rally that heard speeches from major US political figures such as former New York Mayor Rudy Giuliani and former US ambassador to the UN John Bolton.

Demonstrators chanted “Down with Ahmadinejad; viva Rajavi”, referring to opposition leader Mrs. Maryam Rajavi who addressed the crowd via satellite from Paris.

Rajavi, president-elect of the main opposition coalition National Council of Resistance of Iran (NCRI), urged Western leaders to stop “appeasing” the Iranian regime. “The only solution for the Iranian crisis is democratic change by the Iranian people and their organised Resistance”, she said.

She urged world leaders to condemn human rights violations in Iran, adding that the UN General Assembly and Security Council should set up a special tribunal to prosecute top leaders of the theocratic regime for crimes against humanity, including the 1988 massacre of 30,000 political prisoners.

Former NYC mayor Rudy Giuliani told protesters that he supported a revocation of the terrorist designation of the main Iranian opposition group, the People’s Mojahedin Organisation of Iran (PMOI / MeK).

“It is time here in America to right the wrong that has been done to you and your cause out of the misguided notion that the violent and tyrannical regime of Iran could be mollified. It is about time that we change the listing of the People’s Mojahedin Organisation of Iran on the terror list”, Giuliani said, adding that the group “is not a terrorist organisation”.

“This is an organisation dedicated to achieving freedom and dignity for its people. … President Obama should support it as a defender of freedom”, he said.

Former US envoy to the UN John Bolton called on the US and other countries to support the Iranian opposition “not because there is any desire whatever by the United States to have influence in a post-Ahmadinejad government in Iran but precisely because we want the people of Iran to be able to speak freely and to choose their own government”.

“The evidence I think is overwhelming that during the Clinton administration the MEK was put on the terrorist list because it was thought to be a way to open dialogue between the United States and Iran. That is an illegitimate basis to make a decision about any organisation”, he said, pointing out that the US Court of Appeals in July ordered the State Department to re-evaluate its ban on the group in light of the evidence.

Bolton said that some 100 members of the House of Representatives had sponsored a resolution in support of the Iranian opposition, and he warned that PMOI members in Camp Ashraf in Iraq were at risk from the efforts of Iran and its allies.

Members of Parliament from Britain and Canada addressed the rally as demonstrators waved tri-colour Iranian flags and banners and chanted “Ahmadinejad, out of UN”.

Inside the UN General Assembly, Ahmadinejad claimed the US government was involved in the 11 September attacks, prompting a walkout by representatives of the United States, 27 European nations, the EU, Canada, New Zealand, Australia and Costa Rica.

By Jubin Katiraie As the coronavirus kills several people every...