BOOK: Camp Ashraf, home to the PMOI (MEK) in Iraq – A short word

Excerpts from the book: “Iran’s Democratic Opposition, A report from Ashraf City,” published in January 2009 following a visit to Camp Ashraf by a delegation of European lawmakers led by Dr. Alejo Vidal-Quadras Roca, Vice-President of the European Parliament. Camp Ashraf was home to thousands of members of Iran’s main opposition group, the People’s Mojahedin Organization of Iran, PMOI (or Mojahedin-e Khalgh, MEK). The MEK members later moved to Camp Liberty, near Baghdad. 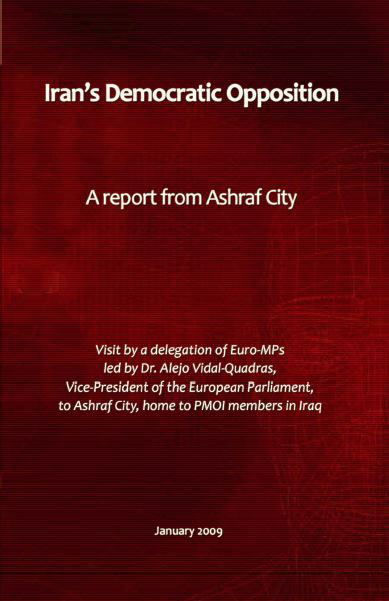 Pages 4-5 of Iran’s Democratic Opposition, A report from Ashraf City:

The book is the culmination of an extensive investigation by a delegation of the European Parliament about several thousand opponents of the Iranian regime based at Camp Ashraf in Iraq’s Diyala Province. The Camp Ashraf’s residents are members of the largest Iranian opposition group, the People’s Mojahedin Organization of Iran (PMOI). The purpose of this book is to offer a close look at the opposition activists at Camp Ashraf which may prove fruitful in the future formulation of EU policy on Iran.

Our committee began its research on Ashraf in mid-2003 and has sent several delegations to there to gain a better understanding in the years since.

There are several reasons why our committee chose to send delegations to visit Ashraf up close. Admittedly, some quarters and governmental departments in western countries make accusations against the PMOI, though the organization counters that they are rooted in the Tehran’s propaganda machinery. In any case, we sought to launch our own independent investigation and provide a coherent analysis of the group in light of these charges. We had issues a few reports in this regard.

Another reason for sending delegations to Ashraf is due to the fact that we in the European Parliament are very sensitive about the developments in Iran and the Middle East region. We strongly believe that Iran which has turned into one of the most important crises centers in the world, has an Iranian solution, a solution in which the people and the opposition play the main role. It was within this context that we felt it necessary to provide the Parliament and European people with fuller insight into the nature of the opposition which Ashraf is the main part of it. Indeed, before visiting Ashraf in 2008, I had for years known of the Iranian Resistance and met many of its members in Europe. But I was struck by how different an image I got after meeting the people there.

But the crucial factor in our decision to send the last delegation to Ashraf relates to Iranian regime’s efforts to get residents of Camp Ashraf extradited or expelled from Iraq. This is what may lead to a human catastrophe. The Iranian regime has many reasons to destroy Ashraf. It wants to eliminate its opposition and at the same time remove Ashraf residents as the main political and cultural barrier to its plan to dominate Iraq.

There has been deep anxiety in the European Parliament of alleged plots by Tehran to force the Iraqi government into violating the basic rights of the Ashraf residents as enshrined in international law and the Geneva Conventions. Both the European Parliament and the Parliamentary Assembly of the Council of Europe have warned against the expulsion or forced displacement of Ashraf residents inside Iraq. We therefore felt that our independent investigations could help activate a more far-reaching effort to avoid a humanitarian catastrophe in Iraq.

Following our delegation’s visit to Ashraf and looking at the developments then on, we wish to call on the Iraqi government to recognize the rights of Ashraf residents within the framework of International Humanitarian Law, Geneva Conventions, international law and the principle of non-refoulement and guarantee their juridical security. In the meantime we also call on the US to guarantee their protection.

I hope you find this brief literature a useful read in getting to know the real Iranian Resistance.

Iraq unlikely to allow Iran banks due to sanctions