Bloomberg: Iran Khodro, the country’s largest automaker, aims to quadruple to 60,000 the number of cars it assembles each year in a venture with the Venezuelan government, in a sign of deepening commercial ties between two U.S. foes. 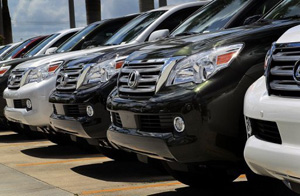 Oct. 11 (Bloomberg) — Iran Khodro, the country’s largest automaker, aims to quadruple to 60,000 the number of cars it assembles each year in a venture with the Venezuelan government, in a sign of deepening commercial ties between two U.S. foes.

“We are still at the initial stage and need to reach our full potential at this site” in Venezuela, said Abdolazim Sadian, Iran Khodro’s deputy chief executive officer responsible for exports, speaking in the same interview. “We have suggested a plan and are waiting for feedback from the other party.”

Sadian declined to quantify the amount of investment needed for Venirauto to boost production, saying that the joint venture’s owners were in talks about this. Sadian and Seifvand did not specify the respective shareholdings in the car-assembly project, which the two countries set up in 2006.

Iran’s ties with Venezuela have intensified since Iranian president Mahmoud Ahmadinejad first took office in 2005. Iran and Venezuela are members of the Organization of Petroleum Exporting Countries, and both have argued in recent years for higher crude oil prices. Ahmadinejad and his Venezuelan counterpart Hugo Chavez favor populist economic policies and have used their nations’ oil wealth to pay for social programs benefitting the poor.

The two presidents are also outspoken critics of U.S. foreign policy, which they characterize as imperialistic.

Venirauto assembles Iran Khodro’s Samand LX passenger car, a five-speed, manual-transmission model that sells in Venezuela as the Centauro. The plant also makes a Saipa car with a 1.3- liter engine that it markets locally as the Turpial.

Iran’s government has started to sell shares in both Iran Khodro and Saipa on the Tehran Stock Exchange, as part of a wider plan to privatize major state companies and boost the economy.

Iran produced 1.39 million cars and commercial vehicles in 2009, making it the world’s 12th-largest carmaker, according to the International Organization of Motor Vehicle Manufacturers. China and Japan are the world’s biggest auto manufacturers, the Paris-based organization said on its website.