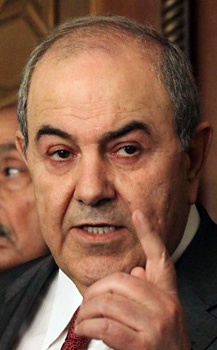 Allawi and Abdullah “reviewed the current situation in Iraq” in their Riyadh meeting, the official SPA news agency said.

Allawi was widely believed to have enjoyed Saudi support against his rival Prime Minister Nuri al-Maliki in the March 7 polls.

Riyadh believes Maliki is too close to their regional arch-rival Iran, according to analysts.

In the election Allawi’s Iraqiya bloc earned 91 seats, two seats ahead of Maliki’s State of Law alliance, in the battle for control of the 325-member Council of Representatives.

But since then neither has been able to demonstrate enough support to assume the premiership.

In July Saudi Arabia urged the two sides to find a solution to fend off dangerous instability.

But last week it also strongly denied Iraqi media reports that it had given the nod to Maliki returning as prime minister, after the country’s main Shiite parliamentary bloc crucially endorsed Maliki for premier.

“There is no truth to what has been reported,” an unnamed Saudi government official told SPA.

“Choosing a prime minister is an issue for the Iraqi people,” the official said.

The Riyadh meeting came four days after Maliki met visiting US Under Secretary of State for Political Affairs William Burns to discuss the stalemate.

By Jubin Katiraie Iran’s Ministry of Intelligence and Security...

New signs of power struggle at top levels in Iran