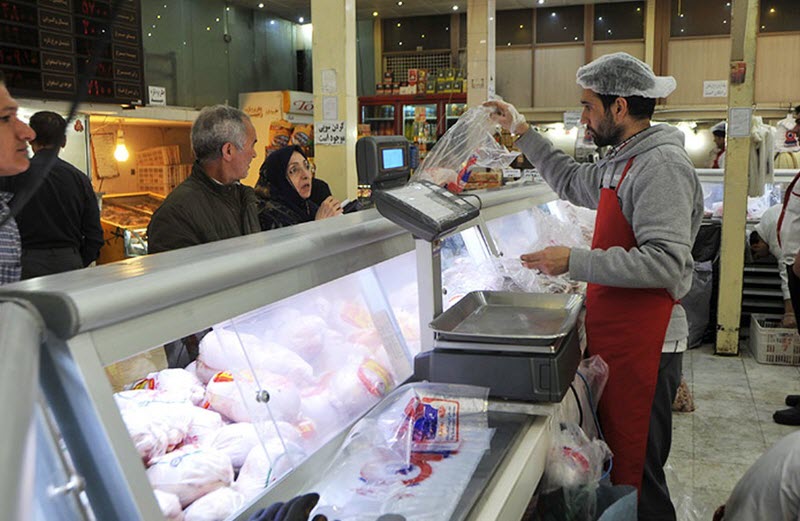 London, 24 Dec – Analysts in Iran believe that soon chicken will disappear from the grocery basket of families in Iran.

While the price of a whole chicken is $1.3 per pound in the United States, the cost in Iran has gone up to almost $1.15. But the income of an average Iranian is many times less than a middle class American.

A producers’ union official has said “a 40% drop in production” and the “poultry producers’ tendency to benefit from the current situation to gain as much as possible”, as well as poultry diseases have pushed prices higher.

Price comparisons indicate that the price of chicken shows more than 40% rise within the last five months.

Prices of many essential goods have been rising in Iran due to the fall in the value of the national currency, made worse by U.S. sanctions.

As red meat and fish have become too expensive, the middle class and poorer strata of the Iranian society have turned to buying poultry, significantly increasing price of chicken according to industry experts.

Meanwhile, a member of parliament has warned that “anomalous increase in the prices of chicken and red meat might lead to the elimination of poultry from the family grocery baskets across Iran.

Meanwhile, an outbreak of the highly pathogenic H5N8 bird flu virus among backyard poultry in the north of Iran has further contributed to the skyrocketing price of poultry.

The Paris-based World Organization for Animal Health (OIE), citing a report from Iran’s agriculture ministry said on Monday, December 3, “The virus infected ten out of a flock of 138 geese, ducks, free-range chickens in the village of Valerian in the Tehran region.”

Reuters: Iran's government is predicting it will need about...

Iran intelligence gaining foothold in US?

Iran Terror: Controversy over a report by New York-based...