U.S. Joint Chiefs Chairman: There Are Real Reasons to Be Suspicious of Iran 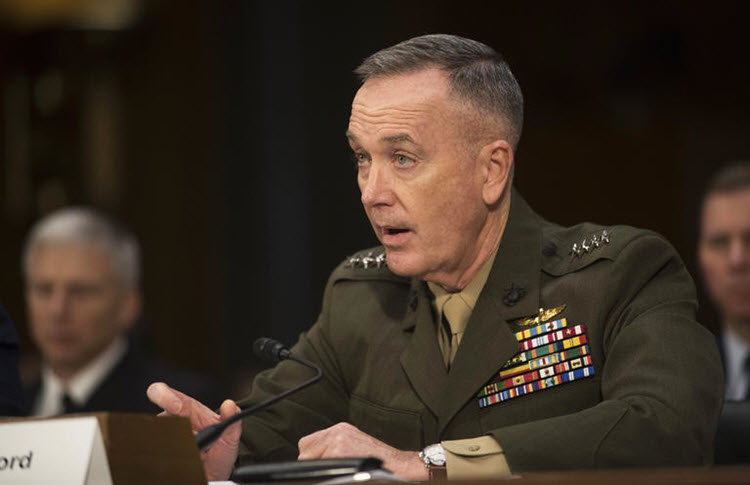 Though the Defense Department announced Friday that just under a thousand American troops would be heading to the Middle East specifically in response to concerns about Iran, they are only meant as a show of force, the chairman of the Joint Chiefs of Staff said Wednesday.

Speaking at the Brookings Institution in Washington, Marine Gen. Joseph Dunford told an audience that putting more boots on the ground was the next logical step after intelligence concluded that a pattern of moves by the Iranian government signaled a heightened threat against U.S. forces stationed in nearby countries.

And there is good reason for that, Dunford said.

The U.S. is seeking to close a “gap in perception,” he added, by reinforcing its presence.

“No. 1, we wanted the Iranians to know that if they did anything, it would be attributed to them,” he said.

“No. 2, we wanted them to know that we had the capability to respond in the event that deterrence fails … and the last was to make sure that those force elements were a manifestation of our will to respond.”

They will follow a Patriot missile defense battalion and the amphibious transport dock Arlington, sent to U.S. Central Command earlier this month, which joined a B-52 bomber task force and the Abraham Lincoln Carrier Strike Group.

“We saw something that looked more like a campaign than an individual threat,” Dunford said of the build-up, which followed an April announcement by the Trump administration that the Iranian Revolutionary Guard would be designated a terrorist group.

“Malign activity” from Iran is not new, he added, but events seemed to be more widespread, coordinated and synchronized than usual.

AFP: The European Union renewed Wednesday a call to...