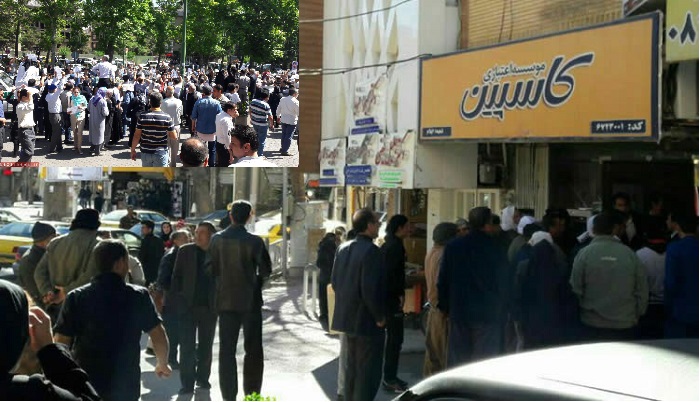 Despite plundering people’s properties, Iranian banks affiliated with the Revolutionary Guards (IRGC), the police, the Basij and the army have rising debts, according to Iran experts. As such, the country’s credit council and the three branches of government have decided to merge all banks into the SEPAH bank.

The state-run website Tejarat News said on 1 October 2019: “The sultan of banking advertising has had his debt to the banks quadrupled”. This website named this bank as the Ansar bank belonging to the IRGC with 500 billion rials of debt.

This website continued: The Ansar bank which will be merged into the SEPAH bank doubled its costs of advertisement to attract deposits. From the other side, the debts of this bank to other banks and credit institutions have quadrupled.

This bank was registered in 2010 and started its activities as the 11th private bank of Iran.

Tejarat News added: The financial statements of the bank show that the debt of the Ansar bank was equivalent to 96 percent of the properties of the bank, so that last year this bank had a debt of 495 billion rials.

The Eqtesad online website wrote, “The Ansar Bank has spent $5 billion over the past seven years on advertising to attract deposits.” Not only did this heavy cost increase the Ansar bank deposit balance, but it also had a negative impact on the deposit attraction process.” (Eqtesad online, 24 August 2019)

The state-affiliated credit firm Samen which was dependent on the Ansar bank after it stole the deposits of the depositors, declared bankruptcy, it has since emerged.

Other banks that have the same situation as the Ansar bank will be merged into the SEPAH bank too. They include the union of banks affiliated with Iran’s military and police agencies, as proposed by Amir Hatami, the Minister of Defense in President Hassan Rouhani’s government.

And later Ali Larijani, the speaker of the parliament, while pointing to the bankruptcy, said that the reason why these banks are being merged into the SEPAH bank is “problems and sickness” of the banks.

Speaking to the state-run newspaper Sazandegi, Larijani said: “These banks had not received permission and had problems. These two issues were decided together and it was difficult to solve, but eventually, this part was resolved. Banks are already suffering from diseases … As you look at the banks, you will find that they have problems in various dimensions and therefore do not have enough funds to provide adequate facilities to the private sector.” (State-run newspaper Sazandegi, 10 March 2019)

Among the financial and credit institutions that took over the name of a bank in recent years are:

The Hekmat bank started its work in 2010 by the direct order of Iran’s supreme leader Ali Khamenei and changed its name from a financial and credit firm to a bank.

Bank of Saman from the credit firm Saman, Bank of Iran Zamin from the Molla Al-Movheddin Credit firm in Khorasan Province got the title of a ‘bank’ by obtaining a license from the Central Bank.

Resalat Bank also operated with the title ‘debt firm’, which began operating as a bank in the early 2010s with the approval of the Central Bank. The debt of these banks to the Central Bank is equal to 970 billion rials.

The debt of the other banks to the Central Bank is from 440 billion to 12 trillion rials.  Now after looting the people’s wealth, these banks and credit firms are bankrupt, and the people of Iran are forced to pay the price.