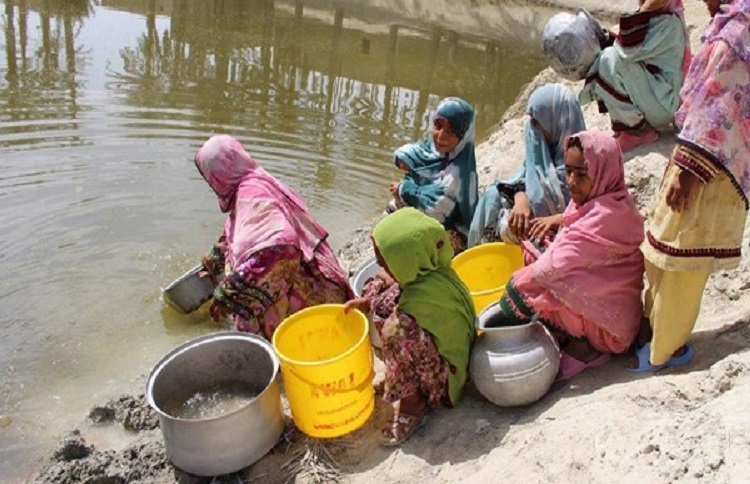 Two children in a Baluchistan village drowned while hauling water from a pond, HRANA news agency reported on Thursday, 10 October. The victims, Sara and Bisma, were from the Dashtiari village.

This is not the first time that children in Baluchistan are drowned when bringing water from ponds. In June, three students from the village of Kamobazaar, part of the Chabahar City, drowned while getting water from a pond. Their water supply network had been out for more than 24 hours and they were forced to bring water by hand.

Strange and more painful was the news in July of a 9-year-old girl from the village Keshary, who lost a hand after a crocodile attacked her while trying to bring water.

Water – the most basic need of human life

Drinking water is a fundamental right of every society and is one of the most basic services that any government is obliged to provide. According to international health indicators, people living in hot and dry areas typically require 70 to 80 liters of water for daily health activities. But enjoying this natural right, especially in the impoverished provinces of Iran, has become an unreachable goal. Needless to say, water scarcity, especially in hot and dry areas of Iran, is one of the problems that annually puts millions of people at risk of serious illness and harm.

The price of asking for water

Iran’s officials resort to repression to avoid solving the problems of Iran’s people. The latest example of this repression was in Borujen city, Charmahal and Bakhtiari province, where a court sentenced 86 people to 2,580 lashes and 344 months of prison collectively because of their protest against the transfer of water to the Esfahan Steel factory from the Baldaji district. (HRANA website 10 September 2019)

Ponds are relatively large man-made or natural pits where rainwater is collected and used for agricultural and drinking purposes of human and wild and domesticated animals throughout the year. The people of Baluchistan call these pits “Hotak”.

Residents of deprived villages in Sistan and Baluchistan rely on these ponds for the daily use of water for themselves and their livestock due to the lack of a water supply network. This puts them at risk of becoming sick of sharing human and animal use of these untreated water resources. Parasitic, infectious and gastrointestinal diseases, as well as severe skin complications, are the most common health problems that people suffer from.

But in addition to all this – the loss of loved ones and the death of children is the price that these people are paying because of the ignorance of Iranian officials about the life of the people.

How much does the water supply cost?

A few months ago, Nasrallah Chari, deputy head of the Sistan-Baluchestan Province Water and Wastewater Department, claimed that the problem of water supply in the villages of Sistan-Baluchestan can be solved with only 300 billion rials. (State-run media Hamdeli 21 July 2019)

But last week, a 30 thousand billion rial robber escaped Iran. The man in question was a co-conspirator of Hussein Fereidun, the brother of Iran’s President Hassan Rouhani. Hussein Ali Haji Deligani, a member of Iran’s parliament, confessed that the robber “donated a house worth of 160 billion rials to Hussein Fereidun’s wife alone”. This is just a small part of the governmental robbery that comes at the cost of the life of oppressed people and the destruction of the health and biological and vital facilities of deprived people in Sistan and Baluchistan and other provinces of the country.

Doesn’t a country with this amount of resources and funds really have such investment to solve the most vital needs of the people in these areas? To answer this question, suffice to compare the funds that the Iranian government is spending for its mercenaries in the Middle East to the costs of providing such simple and primitive life facilities for the people.
Every year, Iran spends $700 million on the Hezbollah in Lebanon and the $100 million on Hamas and the Islamic Jihad in Palestine. These are just two samples where the money of the people is going. In contrast, the total cost of delivering water to these villages is less than $3 million.

Undoubtedly, such a sum would not be accounted for by a government that spends billions of dollars on these groups in Iraq, Syria, and Yemen for its regional purposes from the wealth of these deprived people. Iran’s government prefer building houses and hospitals for Hassan Nasrallah’s mercenaries in Lebanon and its allies in Iraq, rather than solve the problems of the disadvantaged people in Iran who lack the most basic needs such as water.

Reuters: For the Iranian government, the Bushehr nuclear power...

Iran’s Parliament Is Led by the Supreme Leader, Not the President