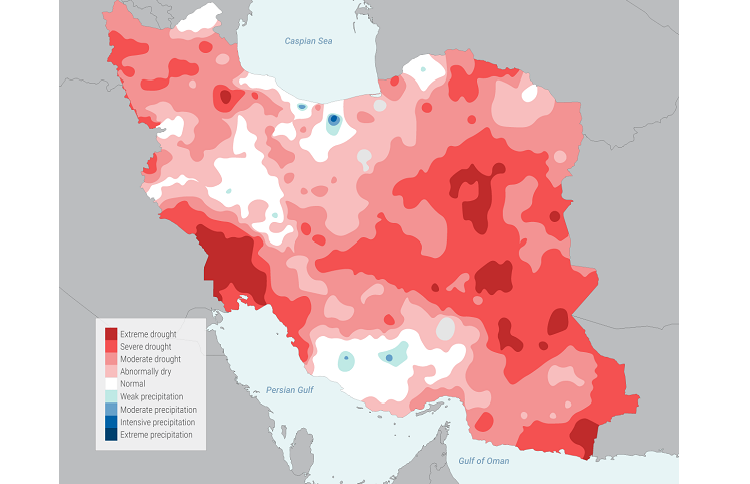 Iran encounters both problems. The plan to build a petrochemical plant near the Iranian city of Firouzabad had everything usually needed to start a project, but the main problem which prevents the project from starting was the scarce resource of water to keep the facility cool. The work at the site is only 10% complete.

The plant needs a lot of water, but the region could not provide that. The fate of the Firouzabad plant is not unique in Iran, even though the nation has huge oil and gas reserves. At least a dozen petrochemical, fertilizer and refinery projects, with a combined capacity to produce more than five million tons a year of products, have hit the buffers or been delayed due to water supply problems.

Oil refineries and other processing plants need water mainly for cooling. Producing a single gallon of gasoline requires 0.61–0.71 gallons of water. But diverting limited supplies away from farming towards industry carries political risks.

Drought and depleting water supplies have sparked unrest. Farmers in Iran’s central region protested in several cities in 2018 over water mismanagement, as rainfall dropped 25% below average.

The plant in Firouzabad, an inland area in the parched south of the country, aimed to produce 1 million tons of ethylene a year. Based on figures for a similar capacity plant, that output would use more than 2 million tons of water a year.

The government, which worries about falling national groundwater levels, wants the $500 million plants to move to the coast where desalinated water could be used. But local officials and a senior cleric have objected, and the project has stalled.

Azizollah Hashemizadeh, Firouzabad’s Friday prayers leader who reports to Supreme Leader Ayatollah Ali Khamenei, the top authority in Iran’s theocratic system, said in June the project would bring prosperity and could not be shifted.

While Khamenei has the last word in state affairs, there is a range of parallel institutions below him that often compete for influence. For example, the Revolutionary Guards, an investor in the Firouzabad plant, has a separate command structure to the conventional army and has vast industrial interests.

In northeast Iran, Khorasan Petrochemical Company has struggled to launch a fertilizer plant to produce 660,000 tons of urea, using gas as a feedstock, Reuters reports. Five years on, the project is at a standstill despite securing $700 million in state support.

“Water resources for the project have not been provided and remain unclear,” Tamin Petroleum and Petrochemical Investment Company (TAPPICO), a major shareholder, wrote on its website.

Agriculture, a major employer in Iran, accounts for about 90% of Iran’s water usage, with industry using 10%. But any extra demand strains Iran’s depleting reserves. U.N. data indicate Iran is using 3.8 billion cubic meters of water a year more than is replaced, leading to a fast falling water table.

Tamin Petroleum and Petrochemical Investment Company (TAPPICO), a major shareholder, said on its website the project had not yet proceeded because it had not secured a water supply.

The expansion of a plant to produce 120,000 tons of propylene a year was halted because of a lack of water.

More than 12 years after breaking ground for the petrochemical plant, Iran’s state broadcaster IRIB reported that it was still not finished due to a lack of water it needed. The plant was designed to produce 677,000 tonnes of ammonia and 1,073 tonnes of urea a year.

Seven years after the official launch, the project site was an empty plot surrounded by a fence, Tasnim news agency said. The plant was designed to have an annual production of 11,000 tonnes of isobutane, 80,000 tonnes of 2-ethyl hexanol and 45,000 tonnes of ethylene. A failure to secure water supplies, as well as difficulty accessing feedstock, had caused delays.

Protests by farmers, concerned about the impact of the plant on water resources, have delayed the petrochemical project, Tabnak news reported, adding the facility needed 15.5 million cubic meters of water a year.

Water scarcity in the inland Khomein area west of Tehran has caused delays to the construction of the plant, state news agency IRNA said. The plant planned to use feedstock from Isfahan and Shazand refineries to produce 185,000 tonnes of polypropylene a year, state broadcaster IRIB reported.

The plan to build a 120,000 barrels per day refinery near a national park in parched Fars Province drew opposition from residents and environmental activists, IRNA reported. The $1.5 billion projects have been delayed.

The oil refinery, which relies on drawing 8 million cubic meters of water a year from the Zayandeh river, has struggled to secure its needs due to drought. The refinery’s chief executive, Heshmatollah Ebrahimi, said in 2018 that 50% of the refinery would be shut down if a long-term solution was not found, Nabz-Naft news website reported.

The refinery, a major Iranian refinery, had to temporarily shut-in 2018 after some water pipes were damaged because of a buildup of salt due to falling levels of the Karoun river and rising salinity, said the refinery’s head of public relations, Mohsen Kab Amir, according to Mehr news agency.

Rally in Canada against state murder in Iran