Maryam Rajavi in the French Parliament: France and Europe Must Stand With the Iranian People’s Demand for Freedom 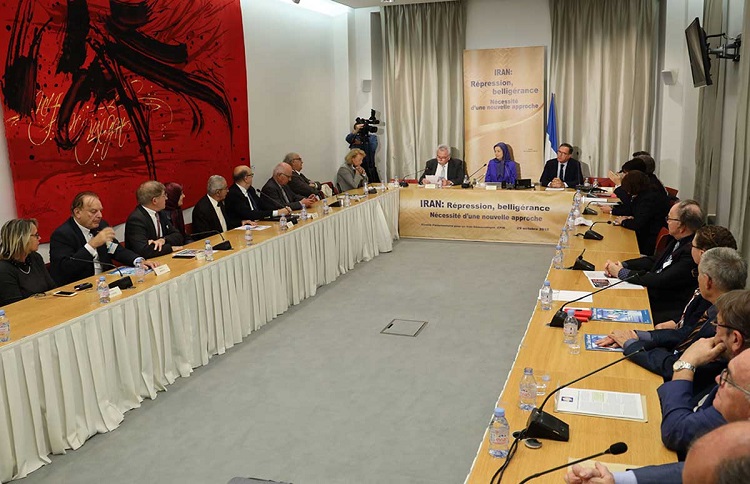 In a conference in the French National Assembly (Parliament), deputies of various political parties heard policy recommendations from Maryam Rajavi, the president-elect of the National Council of Resistance of Iran (NCRI).

Mrs. Rajavi was the keynote speaker at the conference, “Iran: repression, belligerence, need for a new approach,” which was held on Tuesday, October 29, 2019, at the initiative of the Parliamentary Committee for a Democratic Iran (CPID) in France’s National Assembly (parliament). The conference focused on the current situation in Iran and the need to adopt a new attitude towards this regime following the failure of recent international initiatives to contain its destabilizing role in the Middle East.

The CPID includes members of parliament with various political affiliations.

Mrs. Rajavi emphasized that only through the establishment of democracy in Iran can peace and stability be restored to the region. She said that the regime at its most critical period of rule is facing rising anger from the Iranian people, who are demanding regime change. The correct course of action for Europe is to support the Iranian people who demand the overthrow of this regime.

Mrs. Rajavi said that there is no possibility of moderation in this regime, which merely buys time for itself by exploiting conciliatory Western policies while it continues its aggression in the region and advances its ballistic missile program. Meanwhile, Tehran disseminates propaganda inside Iran to strongly criticize France and Europe.

She added that this regime will never change its behavior because it is too weak and isolated. Changing its behavior is tantamount to changing the regime. It cannot give up warmongering, its nuclear projects, or its missile projects in exchange for economic and political concessions. If no firm policy for dealing with this regime is adopted, it will be emboldened and will intensify tension and crises in the region.

Several MPs, ranging from the communist Andre Chassaigne to the conservative republican Philippe Gosselin spoke in the event.

Representative @AndreChassaigne:Unlike the mullahs’ regime, the Iranian people have an organized alternative, the #NCRI, led by a woman @Maryam_Rajavi“#FreeIran #NoImpunity4Mullahs pic.twitter.com/iMXY2YfQQH

“Foreign war and negotiations without end lead to more aggression and threats. We must think about change and support regime change by the Iranian people and the Iranian resistance,” affirmed Yannick Favennec, member of the Defense Committee of the French Parliament and Vice-Chairman of the Parliamentary Committee for a Democratic Iran.

Michèle de Vaucouleurs, Vice-Chairperson and Chairperson of the Parliamentary Committee for a Democratic Iran, stressed that this Committee has carried out its mission to inform French parliamentarians and French public opinion on the issue of human rights and women’s rights in Iran, and touched on recent developments in Iran with human rights violations, especially in the field of repression of women.

Simultaneous with the conference, for the first time an exhibition on the massacre of 30,000 political prisoners in Iran in 1988, was held next to the National Assembly on the Esplanade des Invalides. The overwhelming majority of the victims of the massacre, considered the largest massacre of this kind since the Second World War, were activists of the People’s Mojahedin Organization of Iran (PMOI/MEK Iran).