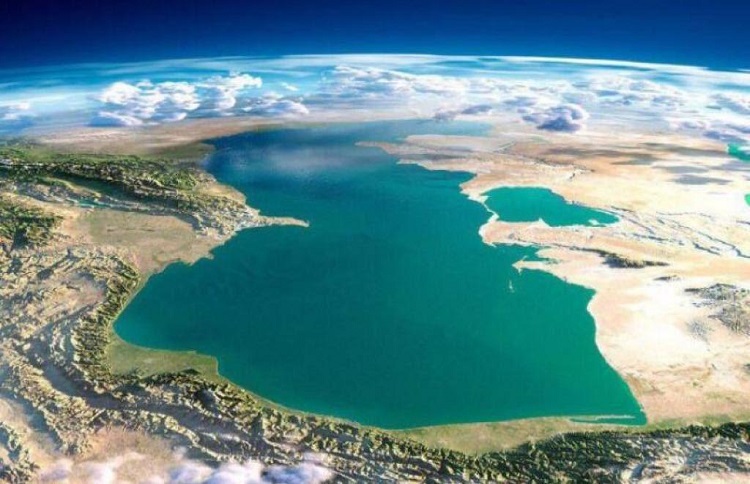 The unclearness in the Caspian Sea Water Transmission Project to the Iranian province of Semnan and the Iranian government’s insistence on carrying out the project at any cost has cast doubts on the project. After the plundering of forests, mountains and the ground, now a new phenomenon is being looted: “seawater”.

The seriousness of the project’s ambiguities can be traced back to the confession of the Head of the Environment Agency, Isa Kalantari, who said: “Some people are politicizing the issue of Caspian Sea water transfer while this subject is under the authority of the Ministry of Energy and no one else”. (Mehr News Agency, 23 October 2019)

The background of the plan, which reportedly included numerous “election benefits”, goes back to Mohammad Khatami’s government, and now Hassan Rouhani’s administration seems to have decided to put it into practice.

“The government has solved the problems of water transfer from the north of Iran to Semnan province and studies have been carried out. If the investors want to move water from the north to the central part of the country, including Semnan, the government is ready to provide them the necessary facilities.” (IRNA, 4 December 2018)

Focusing on the statements made by Iran’s President Hassan Rouhani in Shahroud last year, one can understand that the project has faced a lot of opposition, but Rouhani tried to get rid of them with the words “resolved transfer problems” and “carried out studies”.

The official IRNA news agency, on 23 October 2019, confessed to some part of the ambiguities in the project, referring to the conclusion of a report of university professors in Sari university, discussing the details of the project.

According to IRNA, a university professor regrets that they had access to the details of the project two decades after it was made public and said: “Not only is there no detailed water demand assessment plan for Semnan province, but even no report has been published or raised by the Ministry of Energy’s Deputy Chief of Water Assessment, which is the main source of water demand assessment… If such a need exists even for the entire country, this question should be answered: have we ever come up with easier, less expensive and safer solutions that will allow us to make such a big ‘surgery’ “?

Another expert criticizing the lack of transparency in water demand assessment in Semnan province and said: “There have been numerous claims about the type of transitional water consumption in the Central Plateau that is puzzling … The first claim was a lack of drinking water in the central provinces of the country and it was said that they will use the  Caspian water to supply potable water, but in the following years a claim was made about the need for mines in Semnan province [and] a little later on water for agriculture, and in the last case they claimed that water was being diverted”.

“It seems that the purpose of the transmission of the Caspian Water is only a tactic to pass it on in the legal community. While the main feature of the water transfer schemes in the world is its participation and transparency, the project does not address the two cases at all, and the plan is continuing in silence and undercover”.

He added: “There is no compiled documentation to answer these questions”. (Iran daily, 23 October 2019)

Kalantari, Head of the Environment Agency, said shamelessly about cutting down a few thousand’ trees: “You can trigger an environmental impact even by moving a stone”. (Islamic Republic News Agency, 23 October 2019)

But statistics on the website of the (Khaneh Ab Iran) Iranian Water House indicate a far greater disaster: “Overall, 140 kilometers of 180 kilometers from the project fall in Mazandaran province, where approximately 100 hectares of forest will be destroyed”. (Khaneh Ab Iran website, 16 June 2019)

It states that Iran’s government intends to ignore all technical and economic uncertainties and questions, particularly the danger of widespread destruction of forests and rangelands, and to execute the project at any cost.

Although the implementation of the water supply project itself is not a bad thing, especially in a region where its residents have been suffering from water shortages for years, the neglect of Iran’s government and ignoring all the environmental risks and damages caused by the project have raised many doubts.

Based on experiences, so far there have been no projects in Iran that have not involved plundering and embezzlement of billions of dollars by state officials.