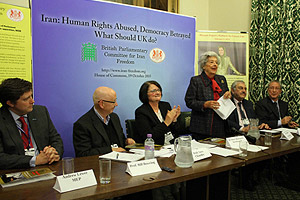 London, 20 Oct – Members of Parliament on Monday urged the United Kingdom government to pressure Iran to halt executions as a precondition to an improvement in trade ties.

Cross-Party MPs and members of the House of Lords took part in a conference in the House of Commons to discuss the underlying reasons for increased executions in Iran and the future consequences of the deteriorating human rights situation in that country, said a statement by the British Parliamentary Committee for Iran Freedom (BPCIF).

“A message was read out on behalf of the President-elect of Iranian Resistance Mrs. Maryam Rajavi at the conference which was attended by over two dozen Parliamentarians and legal experts and which heard also from prominent British human rights advocates and members of the Anglo-Iranian Youth Society. Cross-Party panellists called on the UK government to hold the theocratic regime in Tehran and its leaders accountable for systematic human rights abuses and sponsorship of terrorism, the BPCIF said.

“Speakers strongly condemned the regime’s use of the Death Penalty including the execution of juvenile offenders to spread fear in society. Warning about the alarming trend of public hangings in Iran, they expressed serious concern over recent reports that the regime’s Intelligence Ministry had arrested a number of political dissidents, supporters of the main Iranian opposition group, the PMOI, family members of Camp Liberty residents and former political prisoners”.

“These arrests follow 2000 executions during Hassan Rouhani’s two years in office and three deadly attacks on members of Iran’s democratic opposition, the PMOI, in Camp Liberty, Iraq. Together with the Supreme Leader’s recent order to heighten Internet censorship and intensify pressure on human rights activists in society and prisoners of conscience, these repressive measures testify to the weakness of the Tehran regime”.

The panellists criticised the UK government’s continued failure to “firmly and properly” address Iran’s “systematic atrocities”, pointing out that “repression at home and support for terrorism abroad are the means with which Tehran guarantees its survival”.

They deplored the West’s “intuition to give Tehran a free pass for decades of human rights abuses, politically motivated terror attacks and systematic breaches of UN resolutions and conventions”, and stressed that “it is time to demand accountability for those responsible including senior regime officials and the Supreme Leader”.

Sir David Amess MP, co-chair of the British Parliamentary Committee for Iran Freedom announced that a statement by the BPCIF making policy recommendations on Iran to the UK government is now supported by 200 Parliamentarians from both Houses of Parliament.

“This situation [in Iran] can only be addressed properly if our government and our western allies change their misguided approach towards Tehran and abandon their pursuit of a conciliatory policy toward Iran in the hopes that it would encourage the theocratic regime to change its unacceptable behaviour voluntarily”, he said.

“Iran has been and remains to be the source of instability in the region, any other conclusion is just wishful thinking. For the sake of this nation, the world and our future interests, we should not legitimise a horrible theocracy by shaking hands with its representatives, like Rouhani or [Javad] Zarif. Rather we must now stand with those seeking a free and democratic Iran, which is guaranteed in the ten-point plan presented by Mrs. Maryam Rajavi”, he added.

In a message to the conference, Maryam Rajavi, President-elect of the National Council of Resistance of Iran (NCRI), said: “We have time and again experienced that any policy relying on the Iranian regime, which is the main cause of instability and genocide in the region, is doomed to fail. The right policy is to side with the Iranian people and Resistance. I call on Britain and all western governments to stop ignoring human rights abuses in Iran and predicate their relations with the Iranian regime on the ending the death penalty”.

“I also call on those governments to fulfil their pledge to protect Iranian dissidents in Camp Liberty who are the main target of the Iranian regime’s killing and suppression”, Rajavi added.

Rt. Hon. Baroness Boothroyd OM, a former Speaker of the House of Commons, told the conference: “The nuclear deal does not address the appalling human rights situation in Iran. We must make sure that the UK government does not forget human rights. The Iranian middle class want democracy and change, and the regime is not immune to forces of change”.

Steve McCabe MP said: “We need to make it clear to Iran that we will not tolerate its human rights abuses”. On the situation of thousands of members of the main Iranian opposition People’s Mojahedin Organisation of Iran (PMOI or MEK) in Camp Liberty, Iraq, he emphasised that “Camp Liberty must be declared as a refugee camp under UN auspices to solve the problem once and for all”.

Mark Williams MP said: “The NCRI led by Maryam Rajavi is a democratic and legitimate movement for change in Iran”.

Dr Tahar Boumedra, a former United Nations human rights chief in Iraq, presenting his recent report on Iran’s constitution, said: “Today, Iran is the only country that has mandatory execution in its constitution, which also make paedophilia legal. The Iranian regime considers itself a divine rule, and thus it cannot be reformed, it must be ousted and moved”.

Prof Sara Chandler, President of the Human Rights Commission of the Federation of European Bar Associations, representing 800,000 lawyers across Europe, reiterated that the “UK must make tangible and concrete improvement in the human rights situation, an end to the use of death penalty and release of all political prisoners preconditions to any economic relations with Tehran”.