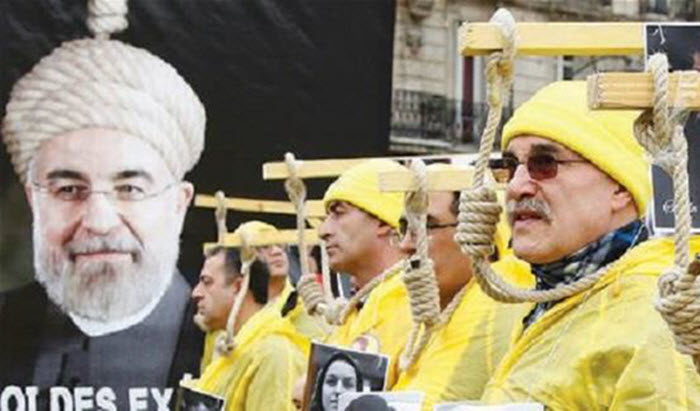 London, 26 Mar – Iran’s main opposition coalition, the National Council of Resistance of Iran (NCRI), has called on the Austrian government to cancel the upcoming trip by Iranian president Hassan Rouhani.

“The Iranian Resistance considers the planned trip of Rouhani, President of the religious, terrorist dictatorship ruling Iran, to Austria against the highest interests of the Iranian people and the countries in the region and calls on Austrian political parties, parliamentarians and defenders of human rights to cancel this visit”, the NCRI said in a statement.

“At a time when western countries have been silent regarding the barbaric violation of human rights and crimes of the Iranian regime in Syria, Iraq and other regional countries, welcoming Rouhani and other leaders of this regime will encourage them in the violation of human rights in Iran, as well as in the export of terrorism, fundamentalism and warmongering in the region and the world”.

“Any relations with this regime should be preconditioned to the annulment of the death penalty in Iran and this regime’s interference in the region”.

The group claimed Rouhani has always been among the highest ranking officials of the regime and should “face justice along with other leaders of this regime for crimes against humanity”.

“He is no different from other regime leaders as far as suppression and export of terrorism is concerned”.

Rouhani has never expressed any opposition to the “collective and arbitrary” executions in Iran that have numbered 2300 during his own time in office, the NCRI said, pointing out that Rouhani has described the executions in Iran as “divine law or legislations by the parliament” that need to be carried out.

US ambassadors to boycott UN disarmament body over Iran role

AFP: United States ambassadors will boycott meetings of the...