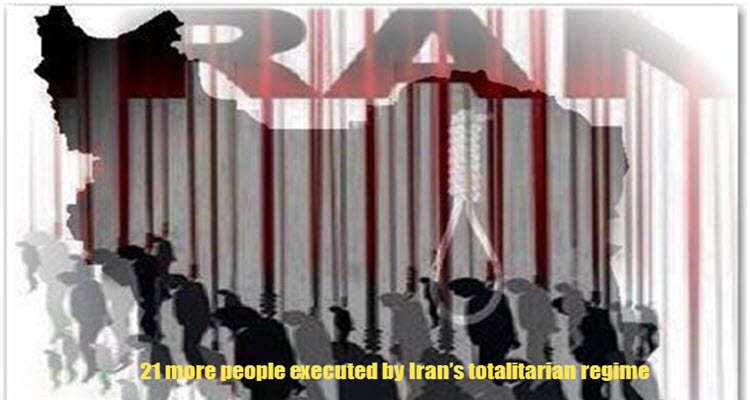 Tehran, 18 May – At least 21 people were hanged by Iran’s fundamentalist regime on Tuesday, according to the opposition National Council of Resistance of Iran (NCRI) which quoted state media reports.

Two men were hanged on Wednesday in the Central Prison of Urmia (Orumieh), north-west Iran. They were identified as Dariyoush Farajzadeh and Ghafour Qaderzadeh.

The regime also hanged six men, who had been jailed for drugs-related offences, in the same prison on Tuesday.

The men, identified as Naji Keywan, Nader Mohammadi, Ali Shamugardian, Aziz Nouri-Azar, Fereydoon Rashidi and Heidar Amini, were all in ward 15 of the jail.

The state run Rokna news agency reported that another six were hanged in Yazd Province, central Iran. Their charges are not known and only three of the victims were identified by their initials: Ch. R., A. S., and A. B.

The official state broadcaster said another two people were also hanged in the province on Tuesday.

Another unnamed victim was hanged in public in Mofatteh Square, Mashhad, northeast Iran, on Tuesday. The regime’s Supreme Court upheld his sentence.

Two other men were hanged on Wednesday in a prison in Yasuj, central Iran, according to local prosecutor Mehrdad Karami. The men, whose names were not given, were 26 and 34 years old, he said.

A man, only identified by the initials S. R., 31, was hanged on Wednesday in a prison in Sari, northern Iran, according to the judiciary in Mazandaran Province.

A separate report from Isfahan, central Iran, said that a prisoner was hanged in Dastgerd Prison on Monday, 16 May. The victim was identified as Malek Salehi, 35.

Ms. Farideh Karimi, a member of the NCRI and a human rights activist, said: the latest executions since the start of May, including three in public, are of “deep concern”.

“Sadly, however, what adds to our concern is that there has not been an appropriate response by the international community or human rights groups to the appalling state of human rights in Iran”, she said.

This brings the total amount of people executed in Iran since 10 April to 97. Three victims were women and one is believed to have been a juvenile.

April 13, the NCRI released a statement saying that the barbaric executions were designed to intensify a climate of terror in an effort to dissuade anti-government factions from protesting, especially during the visit of high-ranking European officials.

The NCRI said: “(This) demonstrates that the claim of moderation is nothing but an illusion for this medieval regime”.

In its annual report on the death penalty, Amnesty International cited at least 977 executions in Iran in 2015, an increase of more than 200 from 2014.

They said: “Iran alone accounted for 82% of all executions recorded (in the Middle East and North Africa).”

Overall, during Hassan Rouhani’s presidency there have been more than 2,300 executions. Rouhani has said that the executions he endorses are examples of “God’s commandments”.

The United Nations’ Special Rapporteur on Human Rights in Iran said there were more executions in 2015 than any year in the past 25 years.

AFP: The Iranian Red Crescent has decided to send...

Reuters: Iran's legislative watchdog rejected a bill that would...