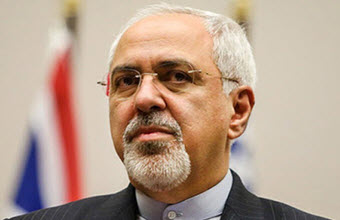 The Syrian Network for Human Rights (SNHR) released a statement on their website Monday reiterating Iran’s contribution to the violence gripping the region. SNHR said they had documented many killings, some of a sectarian nature, in Al Qalamon, Al Nabak, in the easterly countryside of Homs and the southern and eastern suburbs of Aleppo. The statement also recognised Russia’s implication in dozen of incidents considered as war crimes. SNHR want international pressure focused on Iran so it will withdraw any affiliated militia from the conflict in addition to ceasing arming Bashar al Assad’s forces.

Iran’s Islamic Revolutionary Guards Corps have thousands of personnel deployed in Syria, headed and directed by the infamous Qassem Soleimani; whom the SNHR wish to see prosecuted. Iranian President Hassan Rouhani expressed his support for Soleimani in his hometown, calling him a gift for Iran.

Javad Zarif is not shy about praising dubious characters. He recently eulogised a Hezbollah commander, Mustafa Badreddine, who was killed by an explosion in Damascus last week. Badreddine was an early recruit to Hezbollah, along with his brother-in-law Imad Mugniyah. Mugniyah was killed in 2008 and is believed to be responsible for the 1983 US Marine barracks bombing in Beirut that killed 241 people. Zarif, and indeed the Iranian government, clearly considers these men heroes despite the bombings they are believed to have facilitated and committed.

Syria’s conflict is now entering its sixth year and is just one of several heated wars engulfing the region. The broader conflict has left hundreds of thousands of civilians dead and forced the largest migration of people since World War II.