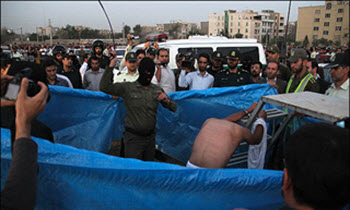 London, 27 May – Iranian authorities have flogged 17 men who had protested the loss of their jobs.

The men were sentenced to between 30 and 100 lashes each; they also had to serve time in prison and pay a fine.

Tehran claims that the ex-labourers were instigating havoc.

Their state-appointed lawyer, Vahid Yari, said in a statement to the state-run Iranian Labour News Agency (ILNA) on Wednesday, 25 May that five men received 100 lashes each, five received 50 lashes each and seven received 30 lashes each.

Their punishment was carried out in mid-May.

The men had worked at the Aq-Dareh Gold Mine in Western Azerbaijan Province, north-west Iran; owned by the Pouya Zarkan Company.

Roughly 350 miners were fired in December 2014 which led to large protests outside the guards’ office, near the mine.

The guards’ conduct towards the protesters was brutal; it led to one ex-employee committing suicide on December 27, 2014.